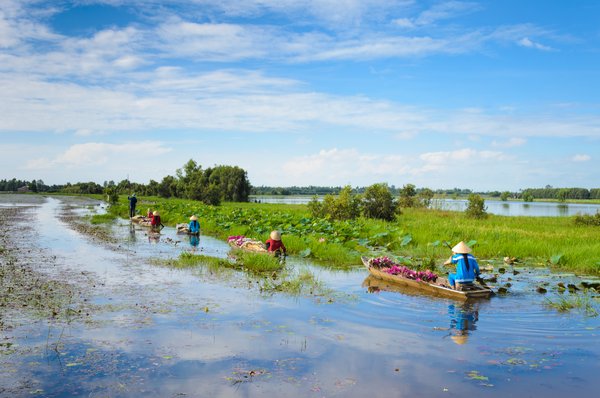 The Mekong regional strategy of the Swiss Development Cooperation SDC

Cambodia, Myanmar, Laos and Viet Nam are lagging behind the other six ASEAN nations in numerous respects. The goal of the SDC’s’s Mekong regional strategy is to close this gap.

Swiss Development Cooperation (SDC) has a long history in the Mekong region. Swiss development activities with Viet Nam started in 1968, and formal bilateral cooperation began in 1992. As a middle-income country, Viet Nam has no longer been part of the poverty reduction programme since 2016.

In 2006 the DEZA opened an office in Laos which today supports the Mekong regional programme. Since 2013 Switzerland also has a cooperation office in Cambodia. The DEZA’s Mekong regional strategy covers Cambodia and Laos and regional and supranational projects in Myanmar and Viet Nam.

“The challenges in Laos, Cambodia and Myanmar are very similar,” says Franziska Freiburghaus, head of SDC’s East Asia department. She went on to explain that the gap between rich and poor is wide in all three countries, and poverty is still widespread – particularly among the rural population and ethnic minorities. All three countries also have a violent past and share management of the Mekong.

Agriculture and vocational education and training

Switzerland’s main goal is to reduce poverty in the region and support fair and sustainable development. For this, it is active in the areas of local governance, agriculture and vocational education and training. Besides numerous national projects, SDC is also contributing to a regional approach to reform and development processes in relevant areas. One example is support to the Mekong River Commission, which is working towards sustainable management of the Mekong.

The work is complicated by China’s growing influence and the focus on economic development. “We need to work with governments which are dismantling democracy while at the same time trying to incorporate the needs of civil society,” Franziska Freiburghaus explains. This is most successfully done by working on a decentralised basis in sectors such as agriculture or vocational training and education. “It is then easier to include political issues such as citizen participation or human rights.” The responsible authorities are very interested in the development of their sectors.

Further information on the work of the SDC in the Mekong region is available in the latest issue of “Eine Welt”, the quarterly magazine of the Swiss Agency for Development and Cooperation. This can be downloaded as a PDF file at: www.eda.admin.ch/dam/deza/de/documents/publikationen/Eine-Welt/eine-welt-2018-3_DE.pdf