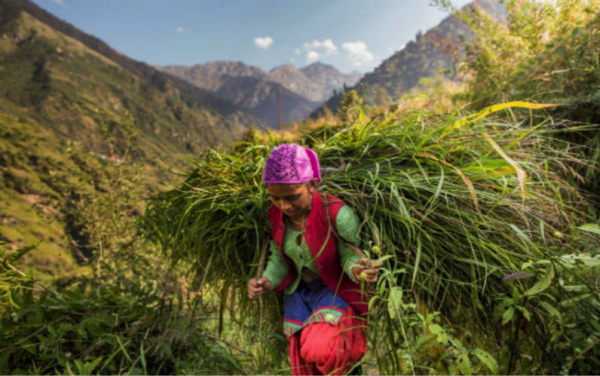 We need to know who “people” are – men, women, children – and in what social context they live – poverty, lack of education, etc.
Photo: © Martin Garcia/ LEISA magazine

The invisibility of people in development projects

Information from project reports tend to make people invisible by using generic terms such as household, farmers, etc. The first question of interest to development actors is who exactly lives in a household. The second question is in what context these persons live. To know people in a gendered way living in a specific social and economic context fosters empowerment and facilitates a more accurate resource allocation.

Development programmes often aim at empowering people. Empowerment means that people can take their own well-informed decisions, they know their rights and can fight for them. Empowerment is at the core of development. Around 10 per cent of the world population of around 7.4 billion live in extreme poverty, almost the same proportion are undernourished, of which many belong to agricultural smallholder societies.

These societies belong to the focus group of the development work supported by the Swiss Agency for Development and Cooperation (SDC).

The content analysis of 84 Annual Reports of 16 Country and five Regional Programmes revealed that people to a large extent remain hidden in monitoring systems, statistics and reporting. The language of “invisibility” focuses on: household, farmer, family, herder, and entrepreneur. The public are also missing concrete information on women, men, boys and girls living in a context that needs improvements.

For several reasons, information should be based on a person living in a given context. Generic terms hide the most important realities of human beings. Firstly, it is an ethical right to become visible as gendered person living in a particular context. Secondly, making people invisible hinders development actors to come closer to the realities of women, men and children. Lastly, and also as a result of the above, resource allocation may reach the household but not the person who is living there and needs those resources most urgently. Hence, many women, men and children remain in poverty, uneducated, undernourished and ill. Empowerment and a life in dignity never reach them because they are neither seen nor known.

SDC decided to implement a monitoring and reporting system that promotes the visibility of men, women, boys and girls.  It incorporates two steps. The table below shows the process of using a language that moves from invisibility to visibility.

The second step is the introduction of standard indicators that use visibility language and context qualifiers. Furthermore, these indicators can be aggregated and generate all the information to develop a short, personalised, powerful story while at the same demonstrating the relevance of the development gains.

1. Give leadership to men and women to design and implement the development interventions that fit their context. This is the most empowering investment, and it has high visibility.
2. Apply the magic figures: a) Theory of Change for a chosen topic; b) Impact hypothesis; c) Outcomes; d) Indicators; Counterfactuals for quantitative indicators.
3. Apply the magic words: a) Visibility Language and b) Context Qualifiers. A must in any  project design and Monitoring System
4. Involve women, men, girls and boys in Monitoring and make it an empowering and learning process.

SDC will publish a paper in Rural 21 in the first quarter of 2018 that will present in detail lessons from strong evidence of applied research and ways forward to make sure that men, women, boys and girls become visible.