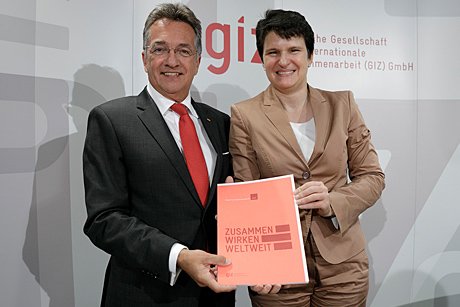 The increasing burden of development aid

Deutsche Gesellschaft für Internationale Zusammenarbeit (GIZ) GmbH is looking back over a successful business year in 2016. However, this also shows the magnitude of future challenges.

With business volume of EUR 2.4 billion, Deutsche Gesellschaft für Internationale Zusammenarbeit (GIZ) GmbH can look back on a successful business year in 2016. At its annual press conference in Berlin on 17 July, Management Board Chair Tanja Gönner reported an increase of EUR 220 million from the German Federal Ministry for Economic Cooperation and Development (BMZ). At EUR 1.9 billion, BMZ provides the largest share of the budget of GIZ, which is active on behalf of the Federal Republic of Germany in over 120 countries.

The challenge of fragility

However, these impressive figures should not make us lose sight of the scale of the remaining challenges. There are 1.5 billion people living in fragile states worldwide, and half the countries where GIZ is active are rated fragile and unstable. Without security, life and health are at risk, infrastructure is destroyed or neglected, and the food supply is frequently interrupted. According to the annual report, economic progress is lagging.

Where there is open conflict, the only answer is to extinguish the ongoing conflagrations. Without a peace agreement in Syria, there will be no end to the humanitarian disaster in the Middle East, Gönner regretted. Meanwhile, GIZ has to try and stabilise neighbouring countries. GIZ is trying to provide children with an education, to avoid the emergence of a ‘lost generation’. Already short of water, Jordan is having to share its resources between even more people, and Lebanon’s six million inhabitants are hosting an additional million refugees. Even if their budget is increased, the continuing political failure of the global community means that the tasks facing the development organisations will carry on growing.

Africa is constantly referred to as the ‘continent of opportunity’, but this can very quickly take a turn for the worse unless the right policy is adopted soon. The population will double by 2050, according to Friedrich Kitschelt, BMZ State Secretary and Chair of the GIZ Supervisory Board. Half will be under 25, and half of these in turn will lack training, unless corrective measures are taken. ‘Education, training, employment’ are the three keynotes in the BMZ priorities for Africa. In isolation, these are useless. Trained workers unable to find work will migrate to where there are openings. This is why, in their closing statement on Africa in Hamburg at the start of July, the G20 nations called for the creation of 20 million jobs a year.

The compass for GIZ’s daily work is Agenda 2030, Kitschelt explains. The 17 Sustainable Development Goals reflect the extent of the tasks facing every development organisation. However, without global policies, they will be unable to master these on their own.