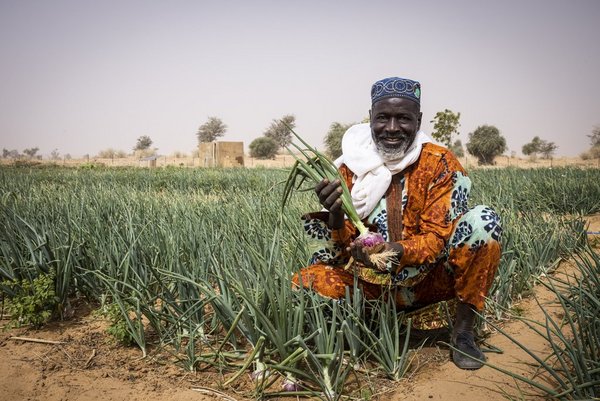 Farmer Madachir Kadir in a kitchen garden near his community of Tahoua, Niger. People's local setting remains the main level at which food system governance and food policies affect them most directly.
Photo: Ed Ram/Concern Worldwide

This year’s Global Hunger Index, which Welthungerhilfe presents jointly with Concern Worldwide on the occasion of World Food Day once a year, again reveals a dramatic global food situation.

Despite some success, the world is facing a serious setback in efforts to end hunger. The present number of chronically hungry people is put at 828 million – in 2015, there were 795 million. In this period, the number of people suffering from acute hunger has almost doubled – from 80 million in 2015 to 193 million today. If this trend is not reversed, according to estimates by the UN Food and Agriculture Organization (FAO), nearly 670 million people will be facing hunger in 2030, which is around eight per cent of the world population. This figure corresponds to that of 2015, when the international community committed to ending hunger, food insecurity and malnutrition by the end of this decade with the Sustainable Development Goals.

Hunger crises are turning into disasters

That the success achieved in combating hunger in the past years has been nullified is above all due to the “toxic mix of armed conflicts, the climate crisis and the impacts of the Covid-19 pandemic,” said Welthungerhilfe President Marlehn Thieme, presenting what is now the 17th Global Hunger Index (GHI) in Berlin/Germany. These crises add to the structural causes of hunger, such as poverty, inequality, poor governance and infrastructure as well as low agricultural productivity.

Already before the ongoing war in Ukraine, millions of people had been confronted with enormous food price hikes. “The war has turned the crises into a world-wide disaster in food supply,” the President said. For example, by August this year, around a quarter of world-wide trade in grain had come to a standstill – a disaster for the countries in the Global South which depend on imports.

“Many people in our partner countries are desperate and no longer know how to access food,” reported Welthungerhilfe Secretary General Matthias Mogge. In Ethiopia, for example, the price of flour had doubled, while in Lebanon, 17 times as much was being charged for a litre of milk as in the previous year. That some prices have once again become stable on the international markets, for example owing to prices for vegetable oils falling sharply, is of little help here – in September 2022, the FAO Food Price Index was still 5.5 percentage points above that of the same period in the previous year.

A lack of political will

Thieme maintained that the crisis could only be coped with by raising finance both for humanitarian aid and for development cooperation in the long run. In this context, she criticised the German Federal Government’s budget plans, which foresee a 20 per cent cut in the budget of the Foreign Office – which is responsible for humanitarian aid – and a 10 per cent cut in that of the Federal Ministry for Economic Cooperation and Development next year. Cuts of around 2 billion euros are stipulated for the period up to 2026. “Here, the Federal Government urgently needs to change its course,” Thieme warns. One was aware of the reasons for hunger as well as solutions to tackle it and the necessary scale of investment this requires. “What is lacking is the political will,” Thieme claims.

Local governance has to be strengthened

This year’s GHI stresses the need to develop fair, sustainable and crisis-resilient global food systems. It argues that achieving this urgently needed transformation requires a systematic integration of all actors at all levels. “People must get the opportunity to to claim their human right to food and to oblige their governments to take responsibility,” says Mogge, referring to the example of the Diffa Region in Niger, which highlights the crucial role of the democratic empowerment of communities and local governance in successfully combatting hunger. Here, dialogue has been promoted between local authorities, research and civil society. For instance, local communities and local authorities have jointly set up decentralised food and animal feed warehouses in order to improve the availability of, and access to, food and feed during the lean season.

The Global Hunger Index 2022 – and/or a synopsis – is available in English, French, German, Italian, Portuguese, Spanish and Chinese.