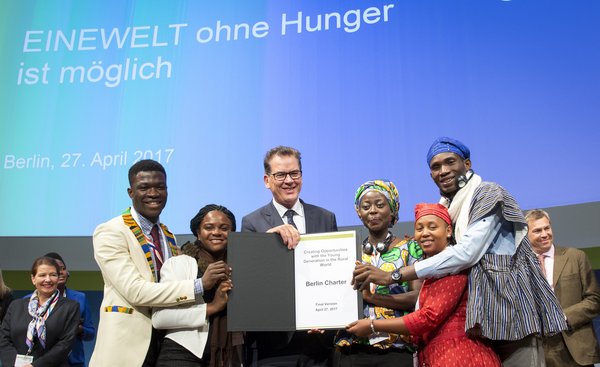 The Future of the Rural World – from knowledge to action

In late April 2017, Germany’s Federal Development Ministry (BMZ) invited around 600 guests from 45 countries to the G20 Conference “One World – No Hunger. Future of the rural world” in Berlin. The meeting centred on creating jobs and improving employment prospects for young people.

The future of humankind will be decided in rural areas. This conviction formed the backdrop of the conference “One World – No Hunger. Future of the rural world”, for which Federal Development Minister Gerd Müller had invited actors from the fields of politics, the private sector, academia and civil society to Berlin in late April in the context of Germany’s G20 presidency. The event focused on how jobs and employment perspectives could be created for rural areas, especially with regard to young people.

The conference was also attended by around 130 young people from Africa, from G20 countries and from Germany. In the run-up to the event, and against the background of their experience as farmers, entrepreneurs or representatives of farmers’ associations and NGOs, they exchanged their views on creating attractive rural regions at the “Rural Future Lab”, and they presented examples of innovative start-ups and business models to the conference participants.

Also, their ideas fed into the “Berlin Charter”. With this “Call for Action”, which was officially accepted by Minister Müller at the conference, the political decision-makers at the G20 and world-wide are requested to take concrete action to address rural development and create more employment for young people. In the “Berlin Charter”, experts from science, civil society, the private sector and development co-operation have drawn up a guiding concept for modern, innovation-friendly rural development which includes the numerous topics in which improvements are needed if living in rural areas is to be attractive to young people. These topics also formed the focal fields of the individual specialist forums at the conference: entrepreneurship, jobs and skills; innovation and digital opportunities; food security and social protection; sustainable landscapes and climate resilience; infrastructure and rural-urban linkages; good governance; finance and funding.

The second day of the conference featured practical examples – concrete implementation initiatives who are supporting progress in rural areas and in creating jobs there, especially for young people. Andreas Proksch, Head of Sector and Global Programmes Department at Deutsche Gesellschaft für Internationale Zusammenarbeit (GIZ), presented the 14 Green Innovation Centres for the Agriculture and Food Sector that were set up in the context of the BMZ Special Initiative One World – No Hunger (SEWOH) in 13 African countries and in India. The Centres aim to enable farmers to increase productivity and to improve their business competencies – also through developing a total of 20 value chains by linking research and development and the facilitation of farmers’ self-organisation. To this end, the initiatives are working in close partnership with private German companies as well as international education and research institutions. “With the green innovation centres, we are not reinventing the wheel. Rather, the objective is the dissemination of locally adapted methods and technologies,” Proksch explained. For example, this refers to introducing drip irrigation in Burkina Faso, promoting the use of mobile phones in Togo or the mechanisation of agriculture in Ethiopia.

Owing to poor tobacco prices in 2011, farmer K. Gondwe from Malawi switched to growing sunflowers and soybeans in 2012. However, selling the produce proved difficult. Gondwe got together with other farmers to form a co-operative. Through contract farming with the Sunseed Oil Company, a scheme supported by the Green Innovation Centre, seed supply as well as sales are now guaranteed. Furthermore, the farmers can benefit from the firm’s extension service. “We used to be price-takers, but now we tend to be price setters,” the farmer noted enthusiastically, describing the changes the scheme brought about for him and his colleagues.

The Indian organisation Apmas collaborates with the Green Innovation Centre to develop community-based organisations in rural areas. Thanks to the establishment of self-help groups, the income and bargaining power of numerous farmers has improved. In particular, the prospects for women and young people in the villages have got better. Not only has there been less migration. “Families that migrated have in fact even returned to the villages,” said Apmas managing director TCS Reddy.

By 2021, the measures in the Context of the Green Innovation Centres are to have increased the income of 860,000 small farmers, created more than 14,000 jobs, educated/trained 1.1 million people and improved the livelihoods of seven million people, according to Proksch.

The current famine crisis in East Africa was a further issue discussed at the conference. “It is shameful that we are seeing one donor conference after the other and are still not capable of providing four million euros of emergency aid for Africa,” Gerd Müller criticised in his opening speech. The international community of states knew what had to be done to pave the way for a world without hunger. Now action had to be taken. The Minister and six further actors from international cooperation have put together strategies to achieve this in the book “Voices against hunger”, which they presented at the conference.