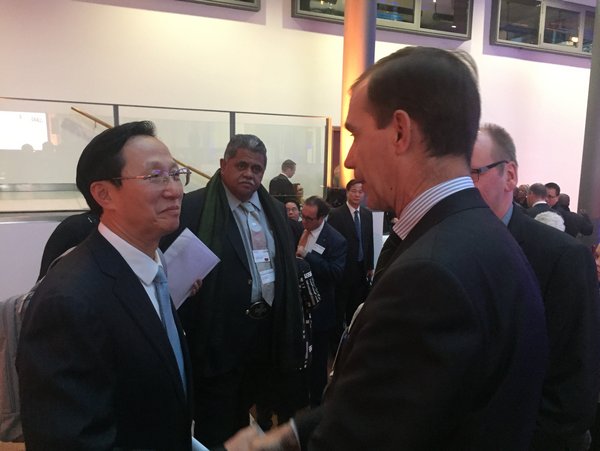 The DLG at the GFFA Business Panel

The German Agricultural Society (DLG) was a joint organiser of the Business Panel at this year’s Global Forum for Food and Agriculture (GFFA), which was duly opened by DLG President Carl-Albrecht Bartmer.

‘Water, food and agriculture: Challenges for farmers and agribusiness’ was the theme of the International Business Panel, held on 21 January 2017 in Berlin within the framework of the Global Forum for Food and Agriculture (GFFA).

‘As the basis for all life, water is not equally available everywhere in the world, and we are called on to use this scarce resource as efficiently as possible,’ to quote the words of DLG President Carl-Albrecht Bartmer when opening the GFFA International Business Panel. Digitalisation extends to water as well. This was one of the core statements in the panel discussion, where participants agreed that increased digitalisation is the future of optimised water and soil management and an improvement in targeted use of plant protection agents.

Dr Ashok Gulati, Professor for Agricultural Economics on the Indian Council for Research on International Economic Relations (ICRIER) noted that in India 74 per cent of agriculture uses sprinkler irrigation. He sees this as partly the result of misguided political incentives. For example, 2,000 litres of water are required for one kilo of sugar cane, which leads to the ‘wrong’ crops with heavy demand for water. He argued that investments should be business decisions, not political ones, and that smallholders should be involved actively in developments.

Ertharin Cousin from the UN World Food Programme (WFP) warned in this context that while innovations and digitalisation are important, we should not lose sight of the fact that in many regions of the world, a first step towards improved water management involves solutions which are easily implemented.