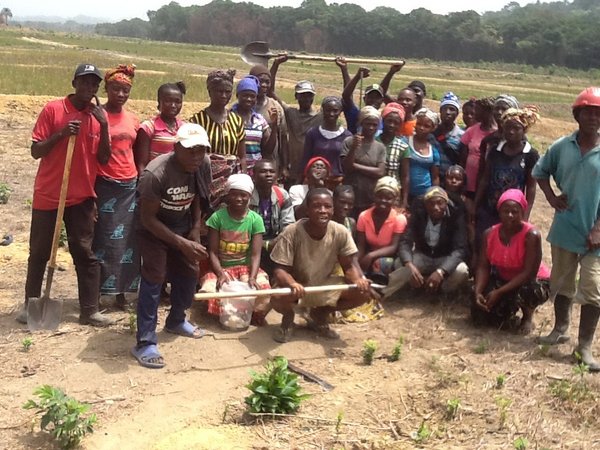 The rice farmers in the Lofa county are willing to produce more on the promising lowlands.
Photo: SDC

Liberia is a resource-rich country. However, it is food insecure and produces only half of its annual rice demand. A recent evaluation shows that Liberia could produce more rice than needed provided that lowland rice production can be rehabilitated.

Liberia is a resource-rich country. Its 4.1 million people cover a living space of 111,370 square kilometres (36 persons/km2). Around 70 per cent of the population live from agriculture and forestry. Agriculture is by far the biggest contributor to labour and to the GDP. The chief staple food of the Liberian population is rice and cassava, with rice mainly produced on rain-fed upland schemes with very low yields of an average 1,000-1,200 kilogrammes per hectare. National rice production only covers half of the demand. The remaining 50 per cent is imported at annual costs of 150 to 200 million USD.

However, Liberia has all the ingredients to become self-sufficient in rice: sufficient irrigable land, adequate knowhow and farmers who are willing to produce more.

In 2012, the Swiss Development Cooperation (SDC), in collaboration with the Liberian Ministry of Agriculture, the UN Food and Agriculture Organization and Civil Society, implemented a pilot project to rehabilitate and develop irrigated lowland rice farming and related activities mainly in Lofa County in the north of Liberia. Until the end of this experimental phase by late 2016, about 381 hectares of swamp land will be developed benefiting 8,550 male and female farmers, allowing their families to be food-secure with rice for more than twelve months per year.

An initial analysis shows that producing more food in Liberia is a “win-win” option for the large majority of the population. The analysis further reveals that older rural people are still familiar with the technology and the approaches of lowland farming. Hence the project could build on a solid basis of knowledge and an existing collective land ownership system.

The study estimates that by moving to the swampy lowlands and by applying improved seeds, productivity could be increased from a current 1,000 kilogrammes per hectare (kg/ha) to up to 2,500 kg/ha. Even two harvests per year may be possible reaching total annual yields of up to 5,000 kg/ha.

The fertile swampy lowlands also allow for vegetable production and tilapia fish farming. Hence the diversity and nutrition value of the human diet could be improved. Furthermore, it is reported that some families within the project were able to sell surplus rice on the market or to use it for feeding their livestock.

The SDC experts strongly believe that an important side effect of the rehabilitation of lowland rice production can be to allow upland forests to recover from the slash and burn rice cultivation system still applied in most parts of Liberia. The study also reports that many women and men in the pilot project in Lofa County support the idea of rehabilitating lowlands in the form of collective action. Working together would help to forget the hardship experienced by countless families in Liberia during the wartimes until 2003.

In the study, SDC has documented all the experiences of the pilot project.  Results of a cost-benefit analysis suggest that economically, rice production in Liberia is beneficial and the cost-benefit ratio is positive. Up-scaling the lowland rice production technology at a national level is feasible, at a non-recurrent investment of 3,500 to 4,000 USD per hectare.

The SDC study also recommends that to reach self-sufficiency in rice and to increase vegetable production, Liberia would have to reactivate and develop 106,000 hectares of the available lowland, assuming one harvest per year with an average yield of 2,500 kg/ha. Thus Liberia only have to use 18 per cent of its potential lowlands to provide sufficient and nutritious food for her population and to further create work to thousands of smallholder farmers.

SDC concludes that the promotion of rice production on irrigated lowland areas is key for Liberia to become self-sufficient in rice and to provide its citizens with food security, better nutrition as well as stronger economic prospects.