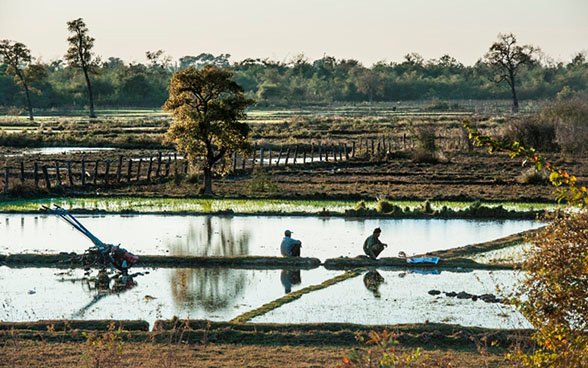 Like here in Laos, the project informs the local population about their land rights.
Photo: © SDC

The Swiss Agency for Development Cooperation (SDC) works to ensure food security for all and has made responsible land governance one of its priorities.

A policy brief published by the Swiss Agency for Development and Cooperation (SDC) in its December Newsletter states that the economic opening up and development of Cambodia, Laos, Myanmar and Vietnam is creating considerable challenges in terms of food security and land use. The governments of the Mekong countries are ceding more and more land via concessions to national and international investors in order to support agribusiness, mining and hydropower in the region. The organisation argues that this trend is resulting in shrinking income for the family farms, declining food security and a threat to access to natural resources.

The SDC states that smallholders in the Mekong countries who are sometimes expropriated without appropriate compensation have to change their profession or even emigrate, and that they need protection and support. With its regional project “Supporting access to natural resources for smallholder”, the SDC seeks to strengthen the rights of smallholders and ensure fair access to natural resources such as cropland, water and fisheries. Here, it is also concentrating on farmer families belonging to ethnic minorities. Since the majority of the population in the Mekong countries are smallholders, the issue is of the utmost importance, the SDC stresses.

In order to offer better protection to the family farms, the SDC is strengthening the land management structures. Another aim is to promote regional initiatives and communication among them as well as to encourage good practices throughout the Mekong Region. For example, in training courses held at village level, farmers have learnt how to defend their rights and negotiate solutions with external investors. At the same time, the SDC supports regional discussion forums addressing land use, e.g. the Association of Southeast Asian Nations (ASEAN).

A wide range of partners have been supported in the context of the project: civil servants responsible for land rights in Cambodia, Laos, Myanmar and Vietnam, politicians, NGOs, private sector enterprises, activists and farmers’ organisations. In its Newsletter, the SDC mentions that Deutsche Gesellschaft für Internationale Zusammenarbeit (GIZ) started to support this project financially and with additional staff at the beginning of 2015.

Soon after the launch of the project in April 2014, a fund was set up for emergencies, the SDC reports, enabling reform actors to rapidly respond to urgencies and also to political options for intervention. For example, the funds helped support local consultations with the civilian population on a future national land policy in Myanmar in November 2014.

Supporting the implementation of voluntary guidelines

The SDC emphasises that this regional project constitutes a Swiss contribution to promoting the “Voluntary Guidelines on the Responsible Governance of Tenure of Land, Fisheries and Forests” adopted by the United Nations Food and Agriculture Organization (FAO) in autumn 2012. The SDC reports that Switzerland was actively involved in developing the recommendations and is supporting their global implementation. In addition, it headed the negotiations on the “Principles for Responsible Investment in Agriculture and Food Systems” that were passed in October 2014.