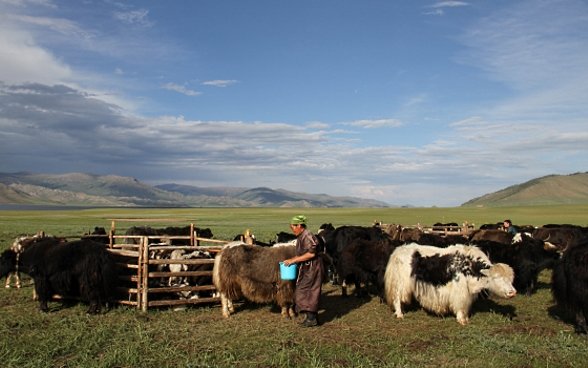 The number of livestock in Mongolia has heavily increased. The SDC is supporting the sustainable use of pastureland, to improve animal health and the marketing of livestock products.

Mongolia's vast grasslands seem to stretch for ever into the distance – but decades of overgrazing now threaten their existence. When Mongolia was under Soviet control, livestock numbers were limited to around 25 million. Since the end of state regulation they have grown to about 70 million (2017). Consequently, two thirds of rangeland – most of which is owned by the state and on which the herders' livelihoods largely depend – is degraded. Many once rich pastures have given way to vast swathes of sand and stone. The animals no longer find enough food over the short summers to survive the cold winter, and many die because of diseases. The herders are finding it increasingly hard to make a living.

In response, the Swiss Development Cooperation (SDC) is supporting a number of measures under its Green Gold scheme. Green Gold, which brings together two previous projects and will run until 2020, has three main goals:

1. More sustainable use of pastureland

The project encourages nomadic herder families to work together in pasture user groups to improve the management of pastures. It also promotes written agreements setting out binding rights and obligations between the pasture users and local authorities.

Herders receive advice to help them improve the quality of their products such as yak and camel wool, hides and meat. The project also creates ties between the herder cooperatives and the processing sectors, cutting out the intermediaries and increasing profits.

Green Gold works at all levels to improve livestock health – from advising herders and vets on disease prevention and promoting immunisation campaigns to drafting and overseeing the implementation of the new act on animal health, which the Mongolian parliament passed in 2017.

The results have been tangible. Since 2006, a network of over 1,300 pasture user groups has grown up over large areas of the country. Some 840 local agreements have been signed, in which the authorities and herder communities jointly set out how many livestock are allowed to graze which pastures at what time, and which grazing lands are allowed to rest. According to Andreas Weber of the Swiss cooperation office in the Mongolian capital Ulaanbaatar, this has «brought the problem of overgrazing to the attention of the herders and authorities, and the jointly agreed rules mean there are also far fewer conflicts among the nomads».

The quality of the livestock products and their marketing has also improved. Many herders have now started combing their yak and camel wool using new tools thanks to the training provided by the project staff. The wool is worth many times what it was before: instead of the rough outer-coat wool, the herders now mainly sell the fine undercoat fibres, which are similar to cashmere. Until recently, yak wool was still a niche product. Nowadays there is international demand. Thanks to newly established cooperatives and direct contact with customers in the city, the herders are also earning more than before from traditional products such as hides, wool, milk and meat.

Getting the authorities and herding communities on board

The rest of the project will seek to roll out these successful approaches in the rest of the country and ensure the sustainability of the results. «We're putting a lot of energy into getting the authorities and herder communities on board», says Weber. For example, the project is organising visits to other parts of the country so herders from new regions can see the benefits of sustainable pasture management for themselves.

The message seems to have won support at government level: the state authorities have continued to run a scientifically-based system for monitoring the grazing and health of pastures, and a bill on sustainable pasture land management is being drawn up. And in 2018 the Mongolian National Chamber of Commerce and Industry presented the SDC cooperation office with the prestigious Silk Road Award, further proof that Switzerland's efforts have not gone unnoticed.