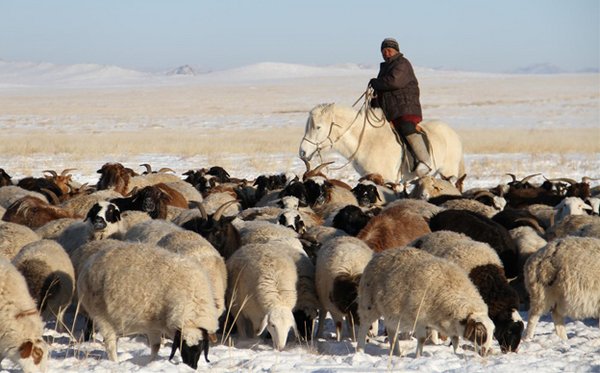 Green Gold, a project of the Swiss Development Cooperation (SDC) aiming to ensure the sustainable management of grazing land in Mongolia, has been selected as an example of best practices in food security by Expo Milano 2015. It is on exhibit at Pavilion Zero, at the EXPO fairgrounds.

One third of Mongolia’s population, which is dependent on herding for survival, is faced with the problem of overgrazing. Empowering herders to collectively manage grazing resources is one of the main objectives of the Green Gold project by the Swiss Development Cooperation (SDC), which promotes the preservation of grazing land. The project was selected from more than 740 proposals entered in an international competition organised by Expo Milano 2015. It is showcased as one example of best practices in food security in the Pavilion Zero at the main entrance of EXPO Milano.

Four fifths of the country’s land area are used for grazing land, which is the backbone of Mongolia’s rural economy. However, most of these grazing areas are degraded. Climate change is of course contributing to desertification, but overgrazing is the primary cause.

Since Mongolia’s transition to democracy, which began in 1990, the community has been granted open access to the previously state-owned grazing areas. With 170,000 households depending on herding for their livelihoods, livestock numbers in 2015 are at an all-time high, at 56 million head. This has led to soil degradation.

The SDC has contributed to establishing pasture user groups (PUGs). The PUGs develop grazing land management plans, which address a number of important issues, including pasture rehabilitation practices such as fencing of pastures, rotational grazing plans and set-aside of land, and disaster risk management. At the beginning of 2015, there were 1,500 PUGs nation-wide, involving more than 53,000 herders.

The PUGs have provided evidence that they are able to organise themselves, and to develop and implement effective and viable pasture management plans. By the end of 2014, 113 PUGs had rehabilitated 3.4 million hectares of degraded land. They had also fenced off 5,000 hectares of pastureland, thus significantly increasing fodder production.

The project helped to strengthen the capacities of Mongolian herders who are currently discussing joint rules for pasture management with the local governments. These autonomous associations are, in fact, increasingly recognised by local Mongolian authorities, who give them permission to manage pastures and provide them with technical advice and financial support. Some of the PUGs have also established revolving funds – loans are repaid in increments over time based on the income of members – to finance new wells, fence and irrigate hay fields, and contribute to the training of herders.

Preserving and maintaining ecosystems provides the essential basis for creating sustainable income for herders. The project thus contributes to the improvement of the livelihoods of 100,000 semi-nomadic herder families in western Mongolia. One of the project objectives is to improve market access for herders by identifying promising niches for products such as high-quality camel or yak wool.

The SDC’s Green Gold project was selected by EXPO Milano in particular for its ability to develop a model for the sustainable management of limited natural resources. Selected projects were required to have an innovative approach. The evaluators assessed the social impact of the projects on issues such as gender, employment, cultural heritage, local economic development, conflict resolution and integration. Projects also needed to address the sound use of natural resources. The results of the projects for the improvement of food security had to be demonstrable and transferable in other contexts.

All in all 18 selected Best Sustainable Development Practices on Food Security had been selected by the Feeding Knowledge network.