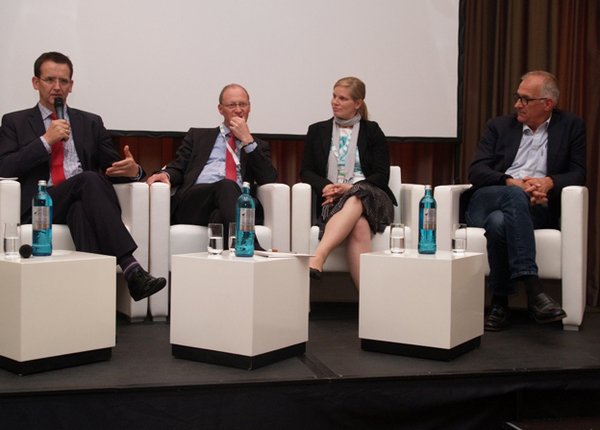 Owing to the ecological and social problems it entails, but also because of the high share of GM seed, soy cultivation in South America is a controversial issue. At the ‘GMO-free Europe’ conference, GIZ held an event on the prospects of trading regionally produced GMO-free soy.

Imported sources of protein play an important role in feeding livestock in Europe. However, Europe can produce nowhere near the amount of protein feed it needs to cover its demand. This is why soy in particular is imported as animal feed from overseas. However, soy cultivation in South America often presents ecological and social problems. Consumer demand for sustainable food grown without genetic engineering is a further important aspect. In the context of the conference ‘GMO-free Europe – Future opportunities and challenges’, which was held in Berlin/Germany in early May, the Bavarian State Research Center for Agriculture (“Bayerische Landesanstalt für Landwirtschaft” – LfL), together with Deutsche Gesellschaft für Internationale Zusammenarbeit (GIZ) GmbH, organised an event on the supply of soy that has not been genetically modified and is grown at regional level.

Germany can cover just 70 per cent of its livestock demand for protein by itself. Although attempts were being made to boost supplies from regional sources, doing without imports of raw material such as soymeal was not possible, said Hermann-Josef Baaken of the German association of animal nutrition (“Deutscher Verband Tiernahrung e.V.”, DVT). The limiting factor for a greater use of GMO-free soy is the legal situation in the event of impurities if the legally prescribed maximum values are exceeded. Baaken referred to a further problem: differences in the authorisation of marketing for foodstuffs world-wide. For example, it has to be ensured that genetically modified plants procured via the world market are authorised for the European Union. Baaken explained that despite stringent agreements, it was becoming more and more difficult to import reliably GMO-free feed, since the share of GM crops was constantly increasing. For example, world-wide, GM soy is now being grown in an area of more than 180 million hectares, amounting to a share of 82 per cent, and even of 100 per cent in countries like Argentina or Uruguay.

For some time now, the German food and tourism corporation Rewe Group has been transforming its range of goods according to sustainability criteria, Rewe staff member Ludger Breloh reported. Hotspots are compiled for products and categories that are particularly critical regarding sustainability. Sustainably produced goods are marked with a special label, and this is supplemented by corresponding products being marked with the label of the “Lebensmittel ohne Gentechnik” association.
The “Bundesverband des Deutschen Lebensmitteleinzelhandels”, representing the German food retail industry, has issued a declaration on the strategic development of protein feed for livestock. Along the lines of the Brussels Soy Declaration, which focuses mainly on the issue of South American soy cultivation, this new declaration emphasises the desire among enterprises for protein feed free of genetically modified organisms. The majority of companies demand this for their own brands. Thus, the declaration goes on to say, “they are fulfilling their commitment to a more responsible production of animal products and the expectations of German consumers regarding food free of genetically modified organisms and food produced without genetic engineering”.

The range of products supplied by the private dairy Bechtel in Scharzenfeld, Bavaria/Germany  includes products of the local brand “Ein gutes Stück Heimat” for the discount retailer Lidl. All animals providing the milk for those products are given feed free of genetic engineering. Since the use of GM feed cannot be detected in the milk, the company has introduced its own quality programme. All contract partners have to disclose their acquisition of feed. The farmers are paid a price for their milk that is above the market average as well as an extra charge for producing milk free of genetic engineering. In addition to the quality programme, the dairy has also founded its own agency for GMO-free feed that sees to the acquisition of feed and corresponding checks.

So there is a demand for GMO-free feed. However, an extensive substitution and transformation process is required to cover it. Also, the question arises whether an appropriate substitute can be found for high-value soy in the short term. Here, bottlenecks like the availability of the corresponding seed could develop.
Generally, a transformation is expected to result in an increase in contract farming systems in order to raise the transparent and traceable origin of goods and establish reliable supply relations. In addition, the participants in the event pointed out that the production of feed without genetic engineering was not sustainable per se. A combination with good agricultural practice was necessary to develop this accordingly.