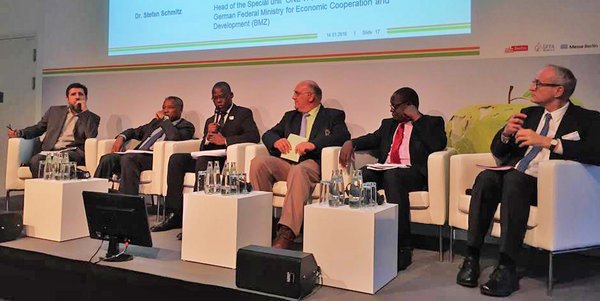 Experts and politicians from Europe and Africa discuss the issue of food security in Africa’s rapidly growing cities.
Photo: © GIZ

Rural transformation in Africa to feed the growing cities?

By 2050, four-fifths of the population of the African continent will live in cities. At the invitation of BMZ, GIZ and the Global Donor Platform for Rural Development, experts and politicians met in Berlin to discuss how the rural areas of Africa need to change in order to secure food for the urban population.

The rural areas of the African continent will have to transform themselves as quickly as possible into modern agricultural centres to ensure food security for the rapidly growing urban population as far ahead as 2050. Innovations and new technologies are urgently needed so that agriculture can regain its appeal, particularly for the next generation. The panellists in an expert discussion round jointly organised by BMZ/GIZ and the Global Donor Platform for Rural Development (GDPRD) agreed on these needs as part of the Global Forum for Food and Agriculture (GFFA), which took place in Berlin, Germany in mid-January.

BMZ State Secretary Thomas Silberhorn pointed to the rapidly growing cities in Africa, observing that in 30 years these are expected to house four-fifths of the population. Demand for food will double. Silberhorn noted that another key problem is the high rate of urban migration among young people, who are turning their back on rural areas that offer them no prospects. He commented that the political decision-makers had to turn their attention to rural development as a matter of urgency, and presented three potential solutions for discussion:

Based on these ambitious goals, the German Federal Government has created a special initiative, ‘One World, No Hunger’, focusing on 13 green innovations centres. Around 500,000 farmers are already benefiting from these innovation centres.

“What we can do to feed the cities: transform agriculture into a business, particularly in the peri-urban regions close to the markets, by promoting fruit and vegetable cultivation with high return-rates”, said Ghanaian Minister of Food and Agriculture Fifi Kwetey. He appealed to the private sector to improve access to financial services in rural areas, something which he acknowledged often failed because of the lack of collateral, such as land. Minister Kwetey emphasised that this was a particular problem for young entrepreneurs.

According to Jean Michel Sourisseau of the French agricultural research and international cooperation organisation CIRAD, it is urgently necessary to increase promotion of small towns and the agricultural areas around them to ease the burden on the megacities. In addition, African agricultural policies would have to focus on productivity and marketing opportunities for small-scale farmers. There is also a need for innovations and technologies in breeding, operating procedures and marketing, for example through adapted mechanisation and farmers’ cooperatives. The danger of a loss of jobs from mechanisation could be countered by adopting labour-intensive high quality production, which will be in increasing demand in the cities.

Theo de Jager, President of the Pan-African Farmers Organisation (PAFO), also called for competitive agriculture. He noted that 46 per cent of the African continent's arable land was still lying fallow, and could be used in the near future with the help of innovative technologies. He also highlighted the need to “leap-frog” from small-scale agriculture to mechanised agriculture in order to increase agricultural production.

A particular problem according to de Jager is the continuing existence of inter-African trade barriers. For example, fruit from South Africa has to be imported to Brazzaville (Congo) via Paris. Farmers also lost added value from agricultural production through unfair distribution along the value chain, de Jager emphasised, with workers in food processing still earning a higher wage than agricultural labourers in the fields.

In response to the question of how can we initiate a rural transformation in Africa, panellists offered various proposals for discussion, which can be briefly outlined as follows:- promote investment in Africa-appropriate modernisation of agricultural production;

What else is needed for rural transformation in Africa? According to PAFO President de Jager, “We need more relevant and transparent data in the agricultural process“. A continent like Africa, whose digital revolution is already legendary, is nevertheless still unable to make data relevant to the agricultural sector publicly available, even though this could be one of the most important foundations for agricultural extension work, risk reduction and innovation. President de Jager appealed to the political decision-makers to deal decisively with this problem.