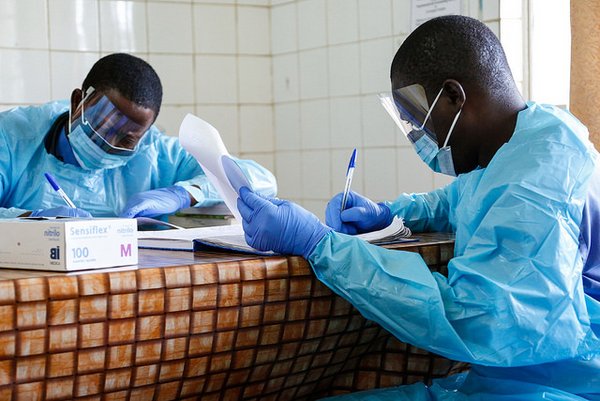 Doctors working at Connaught Hospital, Freetown, Sierra Leone. This Hospital was on the frontline of the Ebola epidemic.
Photo: © Simon Davis/DFID

Germany is providing 205 million euros for strengthening health systems and economic and social recovery in the region affected by Ebola.

With its special programme “Health in Africa”, Germany’s Federal Ministry for Economic Cooperation and Development seeks to support the regions hit by the latest Ebola epidemic in West Africa. This was recently announced by Parliamentary State Secretary Thomas Silberhorn, following his trip to Sierra Leone and Guinea. The programme has a financial volume of 205 million euros and covers a period of two years. The regional focus is on West African countries directly affected by Ebola, their neighbouring countries and countries with very weakly developed health systems. Silberhorn explains that funding will be used to equip health centres, train staff and create access to medical healthcare.

The projects in Guinea have a financial volume of 47 million euros to cover the two-year period. Strengthening the health system is being supported with 32 million euros, while 15 million euros has been earmarked for basic education.

In Sierra Leone, projects with a volume of roughly 60 million euros are being supported in 2015 and 2016. Around half of the funding is for strengthening the health sector, while projects promoting sustainable economic development and youth employment are to receive around 30 million euros.