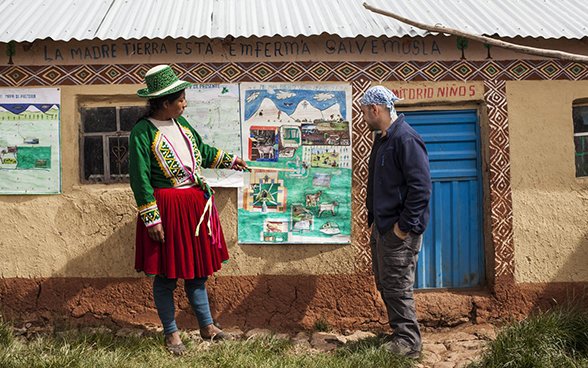 Peruvian population learning to manage the consequences of climate change

The Andean highlands of Peru are heavily affected by climate change. That is why the Swiss Development Cooperation is supporting a project in the country to secure the livelihoods of poor rural communities, and to strengthen their resilience to the effects of shifting weather patterns.

Vegetable-growing on a Peruvian mountain top – which previously seemed unthinkable owing to the altitude and low temperatures – is possible in Santa Rosa, a small village at around 4,600 metres above sea level. For several years now, residents are growing a variety of vegetables, thanks to small covered greenhouses, and the use of home-made organic fertilisers. The families are able now to eat more healthily, sell their surplus, and thereby increase their incomes.

This is just one of the successful climate change adaptation measures that the Swiss Development Cooperation (SDC) has introduced in the Peruvian highlands as part of the PACC (Programa Adaptación al Cambio Climático) project. Peru is regarded as one of the countries the most vulnerable to the effects of climate change. International climate scientists expect temperatures in the Andean highlands to rise by 1.6° Celsius by 2030. In addition, all of the glaciers at an altitude of less than 5,000 metres may disappear completely by as early as 2025. Furthermore, forecasts indicate that, in forty years' time, the Andean highlands will have only 60 per cent of their current level of water resources. All of these factors will have a crucial impact on the country's economic capacity, in terms of the production of food, energy and other goods, for example.

The PACC project builds capacity among the population and the authorities at the local, regional and national levels, enabling them to adapt to climate change as it affects water, food security and natural hazards. One element of this is the ability to assess more effectively how the climate is evolving, and what effects this will have. This is to be achieved through improved scientific data-collection and climate-modelling, which will improve forecasting reliability and enable action to be planned in advance. It is particularly important to the SDC that these analyses should not be produced on the basis of scientific data alone, but should also factor the first-hand experience of local people. The idea behind this is to strengthen dialogue and understanding between scientists, practitioners, authorities and local communities.

A sound basis of knowledge about the effects of climate change has been acquired and collated since the PACC project began. It has provided the foundation for discussions with decision-makers at local, regional and national levels about strategies to deal with climate change. Two regional and three local governments have since developed adaptation strategies with PACC support. In a pilot project, 1,208 Peruvian families in two water catchment areas introduced practices to ensure the sustainable use of water, pasture and other land, and for agricultural production. They improved the storage capacity of their reservoirs and the irrigation systems leading from them, periodically closed off their pastures and thus increased soil fertility, and grew vegetables organically. Schools are also raising awareness about sustainable natural resource management, by teaching children to use meteorological instruments, or having them look after their own vegetable plots, for example.

Up to the end of 2016, the SDC's focus within the PACC project will be on putting strategies into effect and ensuring the broad adoption of adaptive practices. It has also initiated applied research projects with the Universities of Cusco and Apurímac to train Peruvian experts in adaptation to climate change. Furthermore, PACC's well-documented findings are feeding into the political dialogue at national and international levels. This will allow the experience gained in the Peruvian Andes to be applied to other vulnerable mountain regions.


<- Back to: From our partners