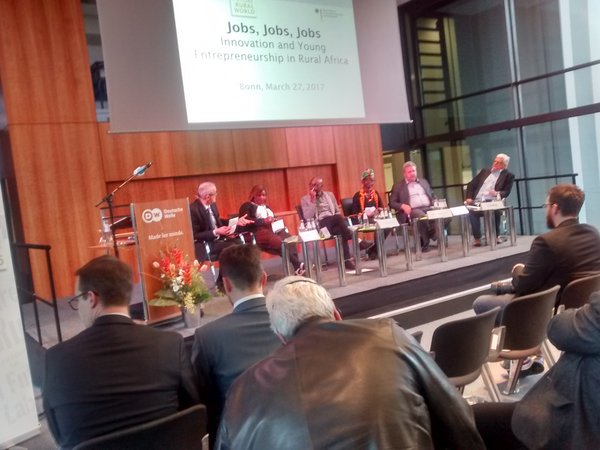 The BMZ’s strong policy focus on rural development is generating a number of concrete initiatives. Linked to the kick-off workshop of the “Rural Future Lab”, some hundred people, including – most importantly – a group of young entrepreneurs from right across Africa, came together in Bonn for a panel discussion on 27 March.

Gunther Beger, head of the policy directorate at the German Federal Ministry for Development and Cooperation (BMZ), set the context of the evening’s topic, “Jobs, jobs, jobs – Innovation and young entrepreneurship in rural Africa”. Despite the explosion of megacities, Africa was, he pointed out, still a largely rural continent. And the future of humankind would be decided in rural areas. Rural communities had, Beger said, too often become globalisation losers, lagging behind in terms of the services and opportunities available in urban life. The challenge for Africa – where the average age is just eighteen – was to make the rural economy a place of opportunity for the young.

With an additional half a billion young people entering the African labour market between now and 2030, a productive and sustainable agro-food sector is key not only to eradicating hunger but also to halting the rural exodus. “Hunger is rural and female,” Beger noted. And the first two panellists to speak were women who have made great strides at local level in advancing the position of women. Halatou Dem, from Mali, revolutionised her mother’s grain-processing business, now specialising in fonio, a resilient variety of millet. Precooking fonio adds value and allows scaling-up for wider markets. She spoke of the positive impact of adding value on job creation for women in the region.

Next, Nana Amponsah, from Ghana, outlined her own experience of trying to set up her own business and initially failing through lack of know-how. Having acquired business acumen in India, she now runs “Guzakuza”, an expanding social consultancy for sustainable farming that offers skills training, mentoring, support and networking. The organisation’s name is programmatic: it means “grow to touch lives” in Swahili.

The role of governments: Create the right environment for job creators

Speaking for the BMZ, panellist Dr Stefan Schmitz presented a vision for turning problems into opportunities. Governments should, he said, be acting to create the right environment for job creators – for people willing to “try doing things in a better way”. He argued that productivity is not merely a question of more inputs, like fertilizer and machines, but is driven by innovation. The BMZ was, Schmitz explained, pursuing this approach through twelve Green Innovation Centres in various parts of Africa. They are to act as hubs for research, demonstration and innovation.

The other two panellists were German entrepreneurs active in sub-Saharan Africa: Lutz Hartmann, lawyer, German-African Business Association board member and co-founder of Fruitbox Africa GmbH, Ethiopia; and Uwe Dudday, who manages Greenfields Energy Corp. Ltd., a renewable energy provider in Zambia. They both gave accounts of launching their businesses and creating jobs, without relying on government support.

Hartmann bought an abandoned farm and began cultivating fruit and vegetable. Dealing with bureaucracy, understanding cultural differences and getting sound information were particular challenges. Thanks to cool storage solutions, his produce was reaching far-off Addis where prices are far higher. The farm was providing permanent jobs in a place where local people had never known employment to last longer than ten days.

Dudday also spoke of the need to listen. Zambia, a country plagued by power-cuts, was ripe for solar energy, especially with the cheapening of photovoltaic systems. He is also looking at biomass as a novel energy source in the form of briquettes from sawmill waste. Roll-out has often been hampered by skill shortages, especially in admin and management.

The questions and contributions from the floor all came from the young Africans, mainly young farmers, food-sector entrepreneurs, rural consultants and NGO representatives. Some of the problems raised centred on lack of investment. They discussed the difficulty of getting private investors to commit to new ventures and getting NGOs to listen to new ideas. Panellist Nana Amponsah’s general advice to young rural entrepreneurs was to seize the initiative and build networks rather than hang around for years waiting for a big loan or relying on donors. There were, she said, creative ways of getting started and raising finance as a business expands.

Whether the appeal to entrepreneurial initiative and creativity can meet the enormous employment and developmental challenge facing rural Africa remains to be seen. Clearly the right steps also have to be taken by governments and international agencies to effect major change. Stefan Schmitz agreed that serious investment was essential: investment by African governments, by the private sector and through international development assistance. The BMZ was urging its partners to step up to the plate.

Spreading a culture of entrepreneurship to the communities

But the focus of this meeting was on spreading a culture of entrepreneurship at local level to raise productivity and create value. Microcredit, the panellists generally agreed, was not a panacea – often spread too widely and too thinly, not least because not every borrower is an entrepreneur. Uwe Dudday reminded the audience that, just south of Bonn, a man called Raiffeisen had responded to the plight of a starving rural population in the mid-19th century by launching a credit union and self-help cooperative – now a household name. There were lessons here for African farmers.

Young Africans today can only be persuaded to stay in rural communities if they have adequate opportunities comparable with those in the city. In an age of smartphones, the days of the traditional rural family were numbered, said Schmitz. Empowering women, in particular, was essential to creating a thriving rural economy. The message that came out of the discussion is that we must enable the young to make the “population dividend” count. Young people across this vibrant continent can become job creators.