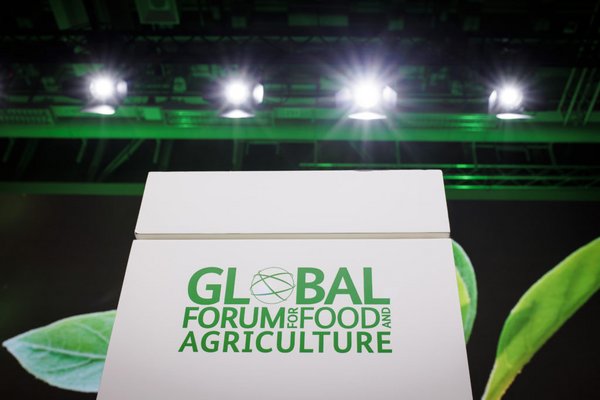 Soil and land was in the focus of the 14th edition of the Global Forum for Food and Agriculture – GFFA.
© BMEL/photothek

Land transformation – from competition for land use to integrative use

Global food production depends 90 per cent on soil. World-wide, however, intensive agriculture and climate change are putting pressure on the ecosystem. This topic was at the centre of this year’s Global Forum for Food and Agriculture (GFFA).

How can soils be better protected and used in a more sustainable manner? Which conditions have to be met to ensure that farmers across the world get long-term and secure access to agricultural land, an important prerequisite for using soils in a gentle and sustainable manner? These issues were at the centre of the 14th GFFA, which this year too was held as a virtual event, running from the 24th to the 28th January.

A panel of experts organised by the German Federal Ministry for Economic Cooperation and Development (BMZ) discussed the issue of how competition for the use of soils could be transformed in a manner enabling integrative use.

In her introductory address to the panel debate on the 25th January, Bärbel Kofler, State Secretary at the BMZ, demanded that agricultural production become more sustainable, while natural resources had to be protected.

Soil conservation and maintaining the natural resources for sustainable food production was one of the items addressed Sustainable Development Goal 15. SDG15 – life on land – contains the commitment to “Protect, restore and promote sustainable use of terrestrial ecosystems, sustainably, manage forests, combat desertification, and halt and reverse land degradation and halt biodiversity loss.” Much had been achieved over the past six years, although there were still problems with implementation, Kofler stated.

German development cooperation was promoting the transformation of the agricultural sector into an agro-ecological mode of production with reductions in the use of synthetic fertiliser and pesticides, the State Secretary explained. In this context, Germany was cooperating closely with local groups and was also basing its project activities on the traditional knowledge and knowhow of local farmers. Kofler estimates that in this manner, a better and more sustainable food base could be created for around 1.3 billion people in rural areas in Africa and Asia.

Protecting soil as a natural resource was also the aim of the considerable effort which the Federal Government was making in the context of the UN Convention to Combat Desertification (UNCCD), the State Secretary stressed. According to estimates by the UN Food and Agriculture Organization (FAO), around 600 million hectares of farmland was lost each year through degradation and desertification, Kofler maintained. In the context of the UNCCD, major efforts were being made to reclaim productive land, also through large-scale afforestation measures such as the Great Green Wall in Africa.

Particularly with regard to women, there could be no sustainable agricultural production without land rights, the State Secretary stressed in the GFFA panel debate, for without land titles, no investing in agriculture was possible. This was why the implementation of the Voluntary Guidelines on Tenure (VGGT) was a further focal topic of German development cooperation.

The trilemma of land use

Dr Susanne Neubert, Director of the Seminar for Rural Development at Humboldt University Berlin/Germany, referred to a trilemma of land use. This trilemma could only be overcome by achieving climate change mitigation, halting the dramatic loss of biodiversity and solving the global food crisis.

In this context, she stressed that these challenges were competing with each other. And here, what counted was to develop an integrative approach in land use.

Neubert proposes five strategies to achieve this, the first of them being the restoration of terrestrial ecosystems such as forests, wetlands and grasslands. Furthermore, around 30 per cent of the Earth’s surface should be designated as conservation areas.

The third item Neubert referred to was promoting a comprehensive ecological transformation in the form of an integrated landscape approach. Examples the scientist mentioned here included fish-rice systems or agroforestry.

Fourthly, guidelines ought to be developed for a planetary health diet. And finally, Neubert referred to shaping the bioeconomy, e.g. via using and storing biomass.

Implementing these strategies also requires change agents as pioneers of new forms of sustainable land cultivation, pro-active model states showing the way forward with new sustainability standards or subsidies for the sustainable use of land. At global level, Neubert called for a “Global Land Summit” and closer cooperation with international agricultural research, and last but not least, support for closer collaboration with like-minded states.

Achieving Die SDG 15 is also focused on by the UNCCD’s Global Mechanism. Its managing director Louise Baker stressed in the GFFA panel debate that the appreciation of soil as a natural resource was undergoing a change and pointed to the various regional initiatives such as the setting up of the African Great Green Wall, the implementation of which was also being supported by the private sector, for reclaiming arable land was an important investment in secure global food supply.

Baker hopes that support for regional initiatives will continue, and that these will be able to contribute to the goal of regenerating around a billion hectares of land over the next few years will be achieved by 2030. She emphasised that 128 UNCCD member states had already formulated their targets.