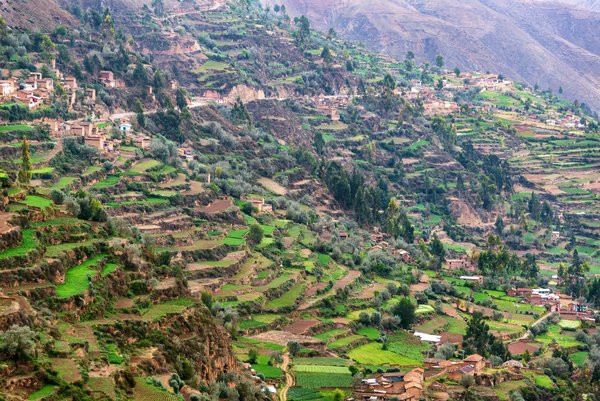 Farming terraces in Tarma in the Andean highlands.
Photo: © Can Stock Photo / jkraft5

Representatives of the ministries of agriculture, insurance companies and academia from across Latin America came together in mid-October for an international meeting "On the right track for risk management in the agriculture and livestock sector" to talk about best practices regarding agricultural insurances.

In Latin America and the Caribbean, agricultural insurances play an important role in the development of the agricultural sector. Agricultural insurances are a financial instrument that allows the sustainability of farmers' work by transferring the risk of losses to specialised insurers, stabilising incomes in the face of production losses and ensuring business continuity.

Insured farms on the increase in Latin America

In general, the number of farmers in Latin America that have access to insurance schemes is increasing, and the losses caused by growing climatic variability are decreasing. In the context of climate change, agricultural insurances are an essential tool for disaster risk transfer.

Therefore, the Peruvian Ministry of Agriculture and Irrigation, Deutsche Gesellschaft für Internationale Zusammenarbeit (GIZ) GmbH and the United Nations Food and Agriculture Organization (FAO) organised the international meeting “On the right track for risk management in the agriculture and livestock sector”. From the 17th to 18th of October, representatives of the ministries of agriculture, insurance companies and academia from across Latin America came together in Lima, Peru, to talk about best practices regarding agricultural insurances, share experiences in the management of disaster risk and promote South-South cooperation in the agricultural sector.

The event focused on two themes: public policies and institutions, and information.

The meeting was inaugurated by William Arteaga, Vice-Minister for Agrarian Policies from Peru’s Ministry of Agriculture and Irrigation, Maria Elena Rojas, official in charge of FAO in Peru, and Paul Garaycochea, Chief of Cooperation of the German Embassy in Peru. Right from the start, Garaycochea stressed that government subsidies should not only target agricultural insurance solutions for subsistence farmers, as was currently the case in Peru, but also support agricultural insurance solutions for small farmers with market access. In line with Garaycochea’s plea, the Ministry of Agriculture and Irrigation’s Director of Financing and Agrarian Insurance, Luis Tejada, announced that government subsidies for agricultural insurances would increase by 28 per cent in 2019, and that a bigger budget would be allocated to commercial agricultural insurances in the future.

The representatives of three regional Peruvian governments presented the progress they had made in gathering agricultural information by means of satellite images through a tool called MAA (Mapping of Agricultural Areas). This highly cost-efficient tool categorises land into agricultural and non-agricultural areas, and even classifies the agricultural area into annual, permanent and forage crops.

The satellite images are currently cost-free and the results are much better than the data currently gathered. The MAA tool could be particularly valuable for other regional governments, given their limited human and financial capital, and could evolve to being a flagship in the provision of agricultural information in centralised developing countries.