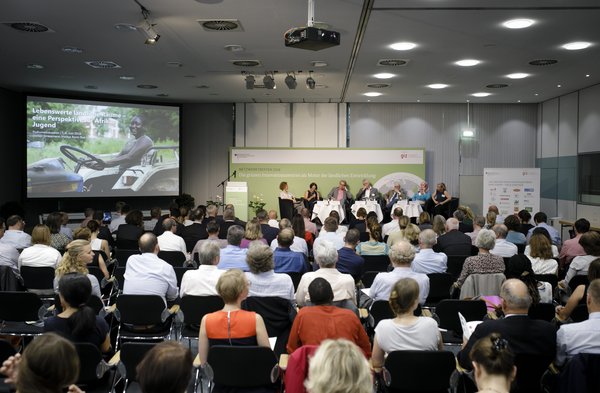 The German Federal Ministry for Economic Cooperation and Development (BMZ) invited the German partners of the Green Innovation Centres (GIAE) to Bonn/Germany for a network meeting on the 7th and 8th June that focused on sharing knowledge and experience.

More than 40 German partners, ranging from “Welthungerhilfe” and “Brot für die Welt” through the German Cooperative and Raiffeisen Foundation, reg. Ass., the agricultural machinery company Lemken (soil preparation), representatives from Technical University Munich to the “Deutscher Landfrauenverband”, got together in Bonn/Germany on the 7th and 8th of June to discuss the topic of “Green Innovation Centres as Drivers of Rural Development”.

The aim of the networking event was to support communication among the partners, but also to boost and intensify co-operation schemes. The broad alliance of actors has been and continues to be one of the success factors of the Green Innovation Centres in securing a better regional supply of food and create employment in the agricultural sector via supporting technical and organisational innovations.

With its special initiative “EINEWELT ohne Hunger” (SEWOH – one world without hunger), the BMZ has placed the topics of hunger and undernourishment more in the focus of the global agenda (G7, G20, Marshall Plan for Africa and Compact with Africa) and emphasised that achieving a world without hunger is achievable!

The Green Innovation Centres, which have been set up and established in 15 countries, form one of SEWOH’s supporting pillars. The GIAE are based on a broad alliance between civil society, business, science, politics and the churches. In order to strengthen this network, the BMZ invited the German partners of the Green Innovation Centres to Bonn. The common sharing of knowledge and experience is above all intended to strengthen the rural regions in Africa and contribute to achieving SDG 2 (End hunger – achieve food security).

The panel debate in the evening on the 7th June was titled “Rural regions worth living in – a perspective for Africa”. Gunther Beger (Head of Department 1, BMZ), Dr Luise Steinwachs (Brot für die Welt), Peter Hüser (Petkus Technologie GmbH), Dalila Delhoumi (APIA, Tunesien) and Professor Helmut Asche (Universities Leipzig und Mainz) discussed the different political, economic and social challenges that rural regions in Africa were facing. The panellists agreed that a lot still had to be done to create rural regions worth living in. “In a nutshell, this means intensifying and expanding tried and tested approaches, closing gaps and extending and strengthening the network of actors in Germany and Africa,” Beger emphasised.

The second day of the meeting was opened by SEWOH Special Envoy Stefan Schmitz (BMZ), who described the next phase and the further development of the GIAE and presented the work schedule for the current German Federal Government’s period in office. “Knowledge and innovations are a key to creating income and employment in Africa’s rural regions,” Schmitz noted.

There, the partners had the opportunity for a lively exchange of knowledge and experience, a stocktaking of what had been achieved and debating how concrete progress could be made among the various topics in future.

The results and impression gained at the networking event were visually recorded during the concluding panel debate and presented to the BMZ by the partners from civil society, associations, business and science. The task ahead is to develop the next phase of SEWOH and support the partners in doing so. In this context, the role of the Green Innovation Centres will be strengthened and extended to achieve a greater measurable impact on productivity, income and employment of millions of farmers.