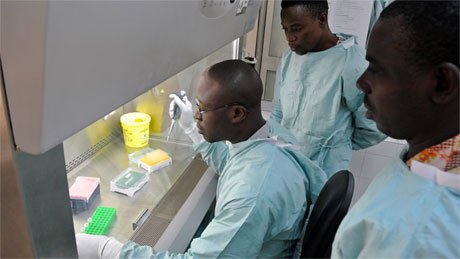 Hospital partnerships are an ideal instrument for sharing know-how. Expertise on symptoms, therapeutic options, technologies can flow in both directions.
Photo: BMZ/Michael Nagel

Hospital partnerships launched with emerging and developing countries are taking off

Partners in strengthening health is an initiative to promote hospital partnerships started in 2016 by the Federal Minister for Economic Cooperation and Development, Dr Gerd Müller, in cooperation with the Else Kröner-Fresenius Foundation. The first funding commitments are going to hospitals in Bavaria.

The initiative “Hospital partnerships with emerging and developing countries” is taking off. Federal Minister for Economic Cooperation and Development, Dr Gerd Müller, and Dr Carolin Kröner of the Else Kröner-Fresenius Foundation presented the first funding commitments to hospitals from Bavaria in February 2017.

In announcing the financing in February, Dr Müller noted that Germany wanted to reach a total of 100 partnerships in 2017. “The partnerships are a win-win situation for both parties, for the facilities in the developing countries and also for the German healthcare workers involved,” he emphasised. “With the help of German hospitals, we’re putting development cooperation on a broader base.”

Every year, millions of children die because they had no access to simple health services. This is why the German Federal Ministry for Economic Cooperation and Development (BMZ) and the Else Kröner-Fresenius Foundation have launched the initiative “hospital partnerships – partners in strengthening health”, to promote partnerships on an equal basis between hospitals and health facilities in Germany and in emerging and developing countries.

According to BMZ, the initiative’s first round of funding applications for partnership projects were received from 36 countries in Africa, Asia, South America and Eastern Europe.

BMZ announced that the first funding commitments went to six partnerships with hospitals in Bavaria in southern Germany, and noted that two more funding rounds are planned this year, in early spring and in autumn.

The following partnerships with hospitals in Bavaria received funding:

- Partnership between Dr von Haunerschem Kinderspital, Munich, and the University of Jimma Teaching Hospital in Ethiopia for basic and further training of doctors in neonatology, the goal being to help reduce child mortality.

- Rechts der Isar Hospital at Munich Technical University is cooperating with Komfo Anokye Teaching Hospital in Kumasi, Ghana. Goal:  improved use of the Centre for Casualty Surgery and Orthopaedics in Ghana.

- Partnership between  Missionsärztlichem Institut Würzburg and the St Martin de Porres Hospital in Eikwe, Ghana. The Ghanaian specialist staff will be supported by training in the field of mother and child health.

- Cooperation between Evangelisch-Lutherische Diakoniewerk Neuendettelsau and the Nkoaranga Lutheran Hospital in rural Tanzania on the “Feuerkinder” project. German medical staff are helping the team in Tanzania in treating children with congenital club feet.

More information on the hospital partnerships