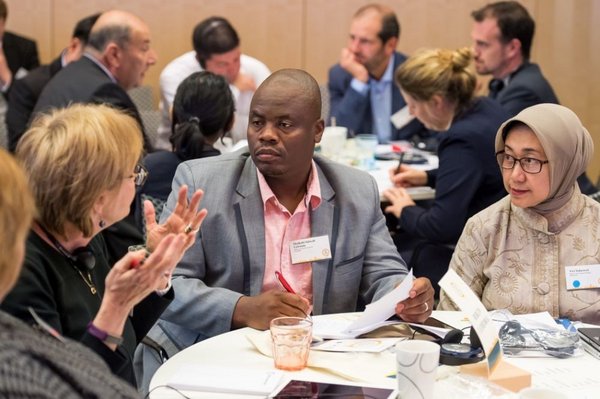 Round table discussions at the Global Learning Forum 2016 in Berlin.
Photo: © GIZ

The number of shocks and crises has been gradually increasing over the past decades. A good reason for the Berlin Global Learning Forum 2016 to focus on social protection systems adapted to economic and refugee-related shocks as well as natural disasters.

Social protection systems are becoming increasingly important as a prevention mechanism to strengthen the resilience, especially for the rural poor. The issue was addressed by this year’s Berlin Global Learning Forum (BLGF), hosted by the German Federal Ministry for Economic Cooperation and Development (BMZ) and jointly organised by Deutsche Gesellschaft für Internationale Zusammenarbeit (GIZ) GmbH and the World Bank Group. It enabled peer-to-peer learning on the topic of “Shock-Responsive [or Adaptive] Social Protection Systems in an Uncertain World” and took up the debate of how social protection systems can prepare for and adapt to a range of shocks.

During the three-day learning event, 75 participants from more than 20 countries presented and discussed 13 country cases on how social protection systems can be adapted to economic and refugee-related shocks as well as natural disasters. The following paragraphs summarise the most important experiences and lessons learnt regarding the latter.

The case of Lesotho showed how an early warning system enables the country to provide a rapid response plan in case of shocks. In Lesotho, 57 per cent of the population live below the national poverty line, and around 80 per cent of the rural population rely on agriculture. Lesotho’s agriculture faces many hazards, the most prevalent being droughts. Yet, most social protection measures were not designed to be adaptive. To enable a better response, the Disaster Management Authority implemented an actively monitored meteorological early warning system, developed a contingency plan and put response structures in place, for example by examining the adequacy of existing social protection systems to respond to a shock.

It was pointed out that the integration of the operational systems for social protection with those for disaster management enables an adequate and quick response. Insufficient funding, however, often prevents the response plan to be fully implemented.

The representatives from Pakistan showcased their recently developed response to natural disasters. Pakistan has a poverty rate of 29.4 per cent, and large sections of the population live in rural areas, depending highly on agriculture. The devastating 2005 earthquake in Pakistan was taken as an opportunity for improvement. To speed up and make future responses more effective, the country strengthened the partnerships between various government levels and implemented electronic early recovery cash transfers and a warning system. This allowed for a much improved response in a 2010 flood in terms of targeting, volume, and speed.

Chile highlighted the importance of including many stakeholders in responding to natural disasters. Several natural disasters occurred in the past decade, always hitting the poorest population hardest. In Chile, about 11.7 per cent of the population live in poverty. The creation of linkages between different government levels and agencies had been seen as an important factor for improvement. By linking emergency response and social development agencies, a more rapid diagnosis of a shock was possible, enabling an adequate response with cash transfers and emergency housing.

Kenya, which is very prone to droughts, pointed out that the combination of an early warning system with sufficient cash transfers and infrastructure as well as close monitoring had been key to addressing the vulnerable rural population. Owing to widespread poverty, it was seen as important to also make response broader to increase social cohesion in the communities. Yet, it was already identifiable that cash transfers to certain regions had not led to food price fluctuations. Additionally, an introduced electronic cash delivery system had improved the response time and enabled more precise targeting.

In the Philippines, Typhoon Yolanda, affecting more than 3.4 million families and displacing over four million people, had been the starting point for improvement. At that time, only limited emergency preparedness measures existed, and no institutional arrangements were in place. To improve disaster response, the government focused on the integration of the local level as an implementing disaster response partner. Furthermore, responses were to be more widespread and long-term. Thus, improved shelter, infrastructure and overall livelihoods reduced poverty from 28 per cent to only 19 per cent in 2015.

For many of BMZ’s partner countries, Adaptive Social Protection, especially in rural areas, will continue to be an issue in the coming years. This is to be further addressed at global level, for example in the framework of discussions around COP21, the SDG Agenda and the German G20 Presidency in 2017. A follow-up of the summarised results and lessons learned is planned in the South-South Learning Forum in September 2017, organised by the World Bank Group and supported – amongst others – by German Development Cooperation.