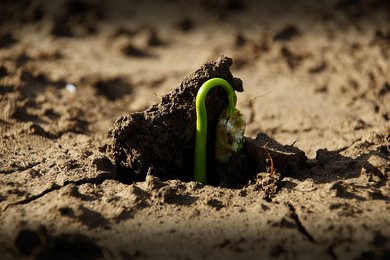 The year 2015 is the United Nations year of soils.
Photo: GIZ

GIZ campaign for the International Year of Soils

To draw attention to the United Nations International Year of Soils, GIZ has been commissioned by the German Development Ministry to run a nationwide information campaign demonstrating the significance of healthy soils in ensuring world food security. The campaign will be presented at the Global Soil Week (GSW) in April.

Soils are a virtually un-renewable natural resource. Every minute, an area of roughly 30 soccer pitches is destroyed or severely degraded in the world. It is precisely these biologically active and healthy soils that we depend on to produce our food. Soil loss is assuming ever more threatening dimensions, not only in developing countries but also in emerging economies and industrialised countries. It is all the more alarming that soil should have played such a minor role in the German public’s awareness.

2015 is a crucial year in terms of global environmental issues such as land degradation and desertification. Following the Millennium Development Goals, the international community will be adopting the Sustainable Development Goals, which are to apply equally to all countries. The United Nations has declared 2015 the International Year of Soils.

Germany is becoming active, too. Commissioned by the Federal Ministry for Economic Cooperation and Development (BMZ), “Deutsche Gesellschaft für Internationale Zusammenarbeit” (GIZ) is planning a nationwide media campaign aimed at establishing greater awareness of the issue of soil among the public.

Here, the focus is on demonstrating the importance of soils as the basis of global food security and vital ecosystem functions. To this end, GIZ seeks to establish a soils network with a wide range of organisations, institutions and associations that are campaigning for soil protection and sustainable land management at national or international level. A website is a key element in the campaign. Anyone interested will find comprehensive information on the issue of soils: all reports on network partners, joint campaigns and events attracting public attention as well as information for the press are concentrated here. The idea is to ensure simple and comprehensive access for users who may as yet have hardly looked into the topic: “Soil is valuable and has a lot to do with me. When I do something good for the soil, I am also doing it for myself and for us all.”

The campaign will be officially launched on the occasion of the third Global Soil Week in Berlin, Germany, in late April, together with network partners Institute for Advanced Sustainability Studies (IASS). There, the BMZ is also going to open the new mobile exhibition on the topic of soil that visualises the multitude of interrelations and connections between soils and humans. Here, interesting angles and new perspectives are to rouse interest among people and encourage them to take a closer look.

Junior scientists and prospective journalists and people working in the media are to develop an interest in the topic of soil as well. This is why GIZ, IASS and the international network WOCAT are inviting 15 Young Professionals to GSW 2015 in Berlin for the first time. There, they will be able to participate in the conference.

GSW 2015 is an important international forum for sustainable soil use and addresses science, politics and the media. It has set itself the task of establishing sustainable land and soil management more strongly in the international political agenda, in research and among the public at large. GIZ is playing a key role in preparing three of the sessions to be held there: “Land Rehabilitation for Food Security”, “Financing Soil and Land Rehabilitation” and “Economics of Land Degradation – how to Integrate Economic Arguments into Decision Making Processes?”.