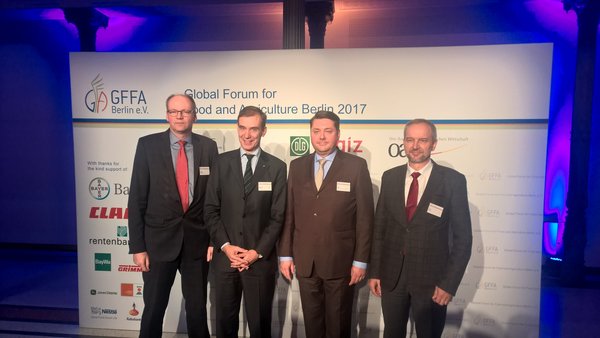 GIZ at the Global Forum for Food and Agriculture in Berlin

The annual Global Forum for Food and Agriculture (GFFA) was held for the ninth time from 19-21 January 2017 in Berlin as part of the International Green Week (IGW), the world’s biggest consumer fair for the food, agricultural and horticultural industries. The Forum’s topic was ‘Agriculture and Water – Key to Feeding the World’. Key actors from politics, business, universities and research and civil society met in expert panels and plenary sessions to discuss sustainable water use in agriculture. Their focus was on two questions in particular: First, what contribution can agriculture make as the largest global water user to more sustainable use of this vital resource, and second, how can access to water be secured for agriculture (and with it, food security for the growing global population).

The political climax of the Forum was the International GFFA panel, organised by the German Federal Ministry of Food and Agriculture (BMEL) and this largest summit of the world’s agricultural ministers brought GFFA to a close. Agricultural ministers from 83 nations in every continent participated in both events. In the final communiqué they emphasised that sustainable use of water in agriculture is a political priority on the global agenda. Without adequate and secure access to drinking water, it is impossible to feed a growing global population.
GIZ was a joint organiser of two expert panels on the topics ‘Three sides of one coin: Agriculture and Water in China’ and ‘Integrated Land and Water Management – Cornerstone to a World without Hunger’.
As a member of GFFA Berlin e.V., GIZ was also a joint organiser of the International Business Panel and the evening reception. The topic of the Business Panel was ‘Water, Food and Agriculture: Challenges for Farmers and Agribusiness’. Here again, the focus was on how agriculture can sustainably use water as an increasingly scarce resource and ensure food security for a growing world population. The panellists, who included the Chinese Minister of Agriculture Han Changfu, agreed that the problem can only be solved through cooperation between all relevant actors. A critical point here is the development of innovative technologies for more efficient water use.

Questions of distribution and Western consumption patterns were also a priority in the discussions, and these aspects were analysed, along with others, by the High Level Panel of the UN Food and Agriculture Organization (FAO). The conclusions of the FAO event can be summarised as follows. The current Western consumption model is very resource-intensive and non-sustainable. In addition to high consumption of resources, many industrialised nations dump millions of tons of food directly in the rubbish – so that thousands of litres are wasted indirectly every year. At the same time, a substantial amount of water is used for cultivating crops which contribute only indirectly to food security, for example large-scale water-intensive soya plantations or organic fuels. Growing land concentration also significantly complicates access to clean water for many smallholders, and their human right to water is frequently disregarded.
GIZ was also represented at a much-visited stand at the GFFA Cooperation Market, where it presented its work, with the focus on agriculture, rural development, food security at the interface to water.