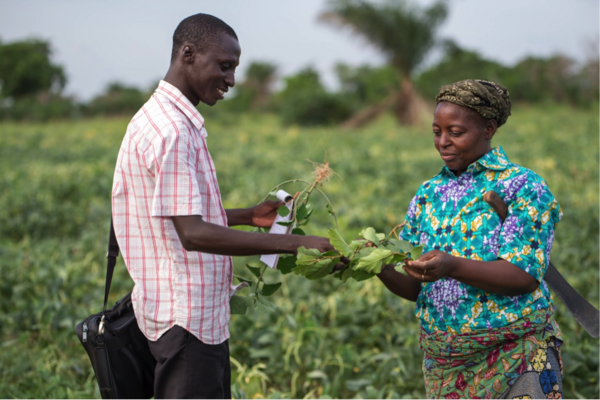 Within the programme on food and nutrition security, GIZ seeks to promote and strengthen female entrepreneurs in the city of Tanguiéta.
Photo: ©GIZ/Klaus Wohlmann

Food and nutrition security: the need for a gender-sensitive approach

The goals of the 2030 Agenda cannot be realised without bringing gender equality to the centre of development co-operation. Although women play a key role in food and nutrition security, only a small number of them have access to the resources needed in this area. With the programme “Food and Nutrition Security, Enhanced Resilience”, “Gesellschaft für Internationale Zusammenarbeit” (GIZ) seeks to tackle this problem in a gender-sensitive way.

The rights of women and girls play an important role in rural development, agriculture, food security and nutrition. Women are particularly affected by poverty and malnutrition (about 60 per cent of the world's under-nourished are women). Although women are primarily responsible for nutrition and health in the family, most of them do not have the necessary resources themselves. Only five per cent of women in rural areas receive agricultural extension services, and only about ten per cent of the total amount of aid for forestry, agriculture and fisheries goes to women. This shows the need for a gender-sensitive approach in food and nutrition security measures.

Therefore, food and nutrition security measures need to consider not only the general nutrition situation but also the specific gender aspects of each country. This requires a major change in political will as well as targeted action and resources. The decisive factor for the success of a promising activity is that not only the general nutrition situation is recorded but that also, the specific gender aspects in the given context are fully taken into account. In this way, the programme “Food and Nutrition Security, Enhanced Resilience” targets several areas at the same time to make sustainable improvements to people´s food and nutrition situation – with a particular focus on women and children.

Gender-sensitive approaches in India and Benin

In India, for example, the Food and Nutrition Security Programme decided together with Ms Archana Chitnis, Minister of the Women and Child Department, to develop a “Nutrition Calendar” to enhance nutrition literacy in all households. The idea behind this concept is to promote seasonal foods such as cereals, pulses, milk, fruit and vegetables and show how to prepare and consume them. Particular attention is given to the specific nutritional requirements of pregnant and lactating women and children. The calendar is a useful tool to bring the awareness of nutrition diversity into each and every household.

Meanwhile, the colleagues in Benin took World Women´s Day as an opportunity to promote and strengthen female entrepreneurs in the city of Tanguiéta. A tour was organised introducing women who work in the food processing sector of nutritious and locally demanded crops such as rice, soy, and sesame. Local authorities participated and were made aware of the importance of gender-sensitive approaches for a sustainable development of communities.

The Food and Nutrition Security Programme operates in eleven countries world-wide. Other promising approaches alongside those in India and Benin include instructing women in new agricultural technologies. This improves and simplifies the production of nutritious foods. Access to local water has to be secured, too, in order to reduce the burden of getting clean water for food, hygiene and plants. Last but not least, women have to be educated about the positive effects of a more varied diet. High-nutrient food is the key for development and health – not only for individuals but also for entire economies. Therefore, the focus on women and children is the most effective investment in the future.