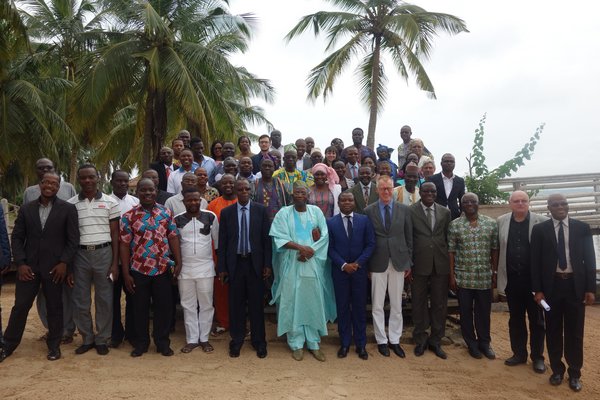 First national conference on food and nutrition security in Benin

Representatives of the package of measures for Benin in the SEWOH project, which is run by the German Federal Ministry for Economic Cooperation and Development (BMZ) and aims to promote nutrition security world-wide, organised a national conference on nutrition and food security in Possotome, Benin, on the 17th and 18th August 2017. The event, the first of its kind, was held in close co-operation with the Benin National Council For Food and Nutrition (CAN), and was attended by roughly 60 leaders, all of them stakeholders in nutrition security and high-ranking political decision-makers (see Box).

Members of ProSAR (Projet de Securité Alimentaire et renforcement de la Résilience) Team urged the government representatives to allocate the financial resources and staffing needed to enable the decentralised structures to efficiently play their role in improving the nutritional condition of the population. Andreas König, Country Director for Benin of Deutsche Gesellschaft für Internationale Zusammenarbeit (GIZ), pointed out that this forum aimed to sensitise the Benin government to the issue of nutrition security and put more emphasis on it. Combating malnutrition world-wide was an important concern of the German government, König stressed.

The CAN stressed the extraordinary opportunity the conference offered to check interventions of the different actors. Despite all previous international forums about the impact of international development co-operation (Monterrey 2003, Paris 2005 to Busan 2011), tangible implementation had not yet been achieved. Having seen the major institutional architecture that Benin had developed to reverse malnutrition trends in the country, the CAN now hoped that palpable results and progress would be achieved in the realisation of aid efficiency in nutrition programmes, in line with international agreements on development aid.

The representatives from the Benin Ministry of Agriculture and the State Ministry of Planning and Development agreed to advocate for concerted and synergic support to promote nutrition and food security.

Mayors and heads of social centres of the five Municipalities (Natitingou, Tanguiéta, Toucountouna, Kérou and Péhunco in the Atacora Department in the northwest of Benin) reported staffing and financial shortages in their local communities. Nadia Fanou, a nutritionist at Abomey-Calavi University, stressed the importance of scientific support for food security measures. The University’s Institute for Food Security has created a centralised database that allows improvements in the co-ordination of tools and of the monitoring systems amongst the different actors.

The participants agreed that CAN, as the national co-ordination authority, should be strengthened in view of creating synergies. They were in favour of a number of measures to achieve this, including:

The participants appealed to the policy-makers to improve equipment and staffing of decentralised (social) government services working in the field of food and nutrition security. In addition, it was decided that the permanent secretary of CAN (which is attached to the office of the President of the Republic) would directly inform the Head of State, as well as the State Minister of Planning, about the results of the conference. Periodical follow-up meetings will be organised by CAN and its partners.

The first results are to be reached by mid-November.

The participants: Deputy Chief of Staff Orou Dèkè Gonroudobou, Secretary General Françoise Assoba Komlan from Benin’s Ministry of Agriculture, Livestock and Fisheries (MAEP) and Benin Ministry of Planning and Development Director Rufino d’Almeida participated in the discussion. Three members of the parliamentarians’ network for nutrition, the director for mother and child health from Benin’s Ministry of Health as well as the programme directors from MAEP and the Ministry of Environment and Sustainable Development contributed to the success of the event, which was chaired by the World Bank representative at the meeting, Ambroise Agbota. Other important actors included the Belgian Development Agency (CTB) via their nutrition project AMSANA (Appui Multisectoriel à la Sécurité Alimentaire et Nutritionnelle dans l'Atacora), the GIZ project Adapting agriculture to climate Change (PACC), CARE Benin, the President of the National Agricultural University Porto-Novo/Benin and the Dean of Abomey Calavi University’s Agronomic Faculty. A delegation from Togo, consisting of members of the sister project ProSecAl, the co-ordinator of the rural development project ProDRA (Programme pour le Développement Rural et l'Agriculture au Togo), delegates from the Togolese Ministry of Health and the government focal point for nutrition of the Scaling Up Nutrition (SUN) Initiative shared their experiences.