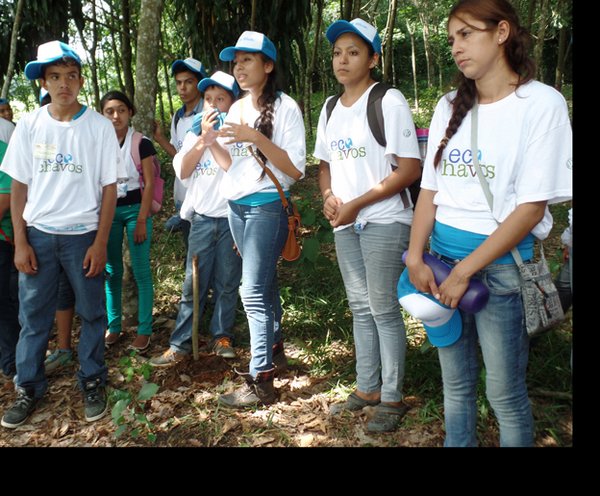 The Ecochavos project seeks to involve young people in practical conservation measures, familiarising them with the role of ecosystems and biodiversity.
Photo: © giz

The giz-supported Ecochavos project in Mexico’s Sierra Madre Orientale seeks to raise environmental awareness in a region that is one day to become a vast ecological corridor.

Connecting two subcontinents, Central America acts both as a gigantic bridge and a destination for migratory species. The Monarch butterfly, an important pollinator, comes down all the way from Canada to spend the winter in areas like Mexico’s Sierra Madre Orientale, which is also home to large predators like the jaguar, with a hunting zone of up to 50 square miles. However, Mexico is relatively densely populated, and much of it is industrialised. This has resulted in a fragmentation of natural landscapes, also in the Sierra Madre Orientale, which is home to around 650 endangered species.

To link up protected areas in the region, the Ecological Corridor of the Sierra Madre (CESMO) was conceived by Mexico’s National Commission of Natural Protected Areas (CONANP) 15 years ago. Supported by Deutsche Gesellschaft für Internationale Zusammenarbeit (giz), CESMO will ultimately also connect a number of biosphere reserves, landscapes designated by the United Nations Education, Scientific and Cultural Organization (UNESCO) as special areas to foster the sustainable use of land and natural resources while safeguarding biodiversity.

Having already introduced programmes on the environment in their curricula in 2005, secondary school colleges in the area’s Sierra Gorda biosphere reserve then embarked on a new scheme to spread awareness of ecosystem services and the importance of biodiversity throughout the Sierra Madre Orientale. Supported by CONANP and GIZ, they are now running the Ecochavos project, which seeks to involve young people in practical conservation measures, familiarising them with the role of ecosystems and biodiversity. Various activities enable them to understand how the elements of an ecosystem, such as water, air, forests and wildlife, relate to one another, and both the benefits it provides humans and the harm that they can do to it.

These “eco youngsters” then act as environmental ambassadors, spreading the word among their parents and other people living in the region. Ecochavos aims to get a total of 10,000 youths involved in environmental protection and biodiversity conservation over a three-year period, and the project is to continue up to 2020. Every six months, the Ecochavos groups from all over the region meet to discuss experiences and best practices.

One of the chief problems facing the region is falling groundwater levels, and Ecochavos students have so far planted nearly half a million mountain pine trees to catch the meagre rainfall. Other activities in this area include planning village ponds and retention dams and clearing watercourses.

Ecochavos groups campaign in towns and villages, displaying banners drawing people’s attention to environmental issues. The project provides efforts to establish the CESMO corridor with an intergenerational dimension. And by maintaining a critical attitude towards administrative and business practice in the region, the young activists can give developments new impetus.