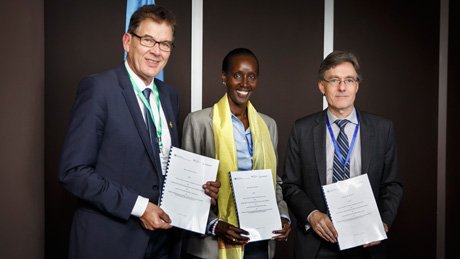 The United Nations Economic Commission for Africa (ECA), the German Federal Ministry for Economic Cooperation and Development (BMZ), and the World Bank signed a Declaration of Intent to establish a new Network of Excellence on Land Governance in Africa (NELGA) to better secure land rights across Africa.

Germany, together with the UN Economic Commission for Africa - ECA – and the World Bank will create a new Network of Excellence on Land Governance in Africa, called NELGA. This was announced in a joint press release end of July. NELGA will complement and support the Land Policy Initiative (LPI), a tripartite partnership of the African Union Commission (AUC), African Development Bank (AfDB) and ECA.

ECA Deputy Executive-Secretary, Ms. Giovanie Biha, welcomed the new agreement to establish NELGA, noting that it responds to the call by Agenda 2063 to "enhance and sustain investments in higher education, science technology and research." She noted that the partnership is in line with ECA’s strategy to promote partnerships with development partners to generate knowledge, underpinned by robust statistics, and to enhance dissemination of findings and best practices for enhanced land policy development.

The German Federal Minister for Economic Cooperation and Development, Dr. Gerd Müller, praised the NELGA initiative and said: "Secure access to land and other natural resources is of vital importance for the people in rural areas of Africa. Assuring that decision makers know how to develop a fair, transparent and development-oriented land policy in a participatory way will be an important contribution to food security and growth in the agricultural sectors, especially for smallholders.”

Representing the World Bank, Vice President Dr. Joachim von Amsberg noted that improving land governance was a smart development investment. He said it helps to promote investment and agricultural productivity; is critical for financial sector development and for controlled urban expansion; and improves domestic revenue generation. "To the extent that it builds analytical capacity, supports monitoring, encourages policy dialogue, and facilitates integration of land governance in country strategies, NELGA will help unlock much larger investments for operations towards strengthening land governance.” von Amsberg said, adding that "The World Bank is fully committed to support this effort by helping to build capacity for data and, research”.

NELGA will support the African Union’s Agenda on Land, in particular the use of the "Framework and Guidelines on Land Policy in Africa” and the Voluntary Guidelines on the Responsible Governance of Tenure of Land, Fisheries and Forests in the Context of National Food Security (VGGT). It is designed to strengthen human and institutional capacities with regards to the development, implementation and monitoring of land policies in Africa that foster economic growth, are equitable, gender sensitive and pay special attention to marginalised groups.
NELGA will function as a network among leading African academic and research institutions and liaise with civil society, private sector, land sector practitioners, and decision makers to address gaps in training, statistics and research on land governance. A scholarship program implemented by the German Academic Exchange Service (DAAD) will create new training and research opportunities for African land practitioners and researchers.

Germany and the World Bank reaffirmed their support for the Land Policy Initiative in this process and appealed to other partners to help finance and ensure that NELGA can sustain itself in its mission to secure land rights for all people, especially those who are poor and marginalised.