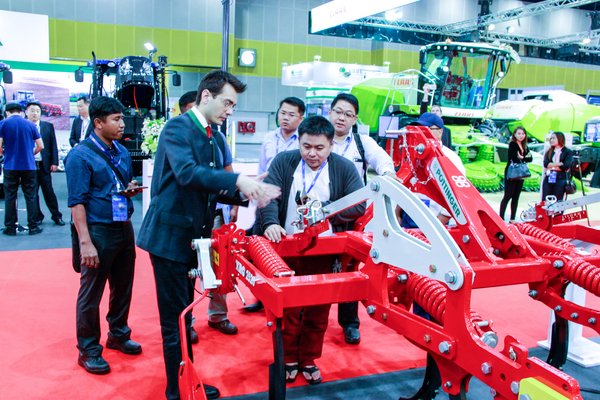 A third of the highly qualified visitors at Agritechnica Asia came from abroad
Photo: DLG

DLG: Successful Agritechnica in Bangkok and Field Days in India

The German Agricultural Society (DLG) is now extending its Exhibition and Field Day Programmes to Asia as well. The first Agritechnica Asia took place in Thailand’s capital of Bangkok towards the end of March. Already for the third time, the Field Days were held in Punjab/India in late January.

The DLG has given the first Agritechnica held in India a positive appraisal. From 15-17 March, around 8,200 professional visitors from 76 countries informed themselves. The event was held together with the Horticulture and Floristry trade fair Horti Asia in Bangkok. With a total of 219 exhibitors from 28 countries, an international information platform was created for the Asian market in next to no time.

Agritechnica Asia is run jointly by DLG International (Frankfurt am Main/Germany) and VNU Exhibitions Asia Pacific (Bangkok). “The Asian version of Agritechnica, the world’s largest agricultural engineering trade fair, has immediately established itself as a meeting point for experts representing agriculture and agricultural engineering,” said Peter Grothues, Managing Director of DLG Service GmbH, and Nino Gruettke, Managing Director of VNU Exhibitions Asia Pacific, taking stock of the event initially. “The fact that a third of the highly qualified visitors came from abroad emphasises the considerable internationality of the new trade fair,” Grothues remarked. And Philipp Schulze Esking, DLG Board Member and Chairman of the DLG Exhibitions Department, maintained: “With this event, we were able to meet the expectations of the exhibitors. Our exhibitors believe that the Asian market offers huge opportunities for new business relations. They are convinced that in the coming decade, mechanisation and the use of modern machinery is going to increase strongly, above all because of an increasing shortage of labour, rising competition and the resulting need to lower production costs.”

The exhibitors’ range of services was complemented by a comprehensive programme for specialists. For example, at  their conferences, the Claas company, the International Rice Research Institute (IRRI), “Gesellschaft für Internationale Zusammenarbeit” (GIZ) and the Regional Council of Agricultural Machinery in Asia and Pacific (ReCAMA/UN ESCAP) focused on the topics of precision farming, rice cultivation and trading and investing in farming machinery in Asia. In addition, a DLG Forum set up specially for the exhibitions offered an opportunity for an extensive exchange of experience and opinions among experts representing various subject areas and for discussions with farmers and technology providers.

The next Agritechnica Asia will once again be held in Bangkok together with Horti Asia and an extended Hosted Buyer Programme, from 22- 24 August 2018.

Field Days India returned to Punjab where it once started three years ago. Organized by DLG International and the German Agribusiness Alliance, the third Field Days India took place from 24-25 January 2017 in the district of Sarabah next to Ludhiana. Live demonstrations of machinery in the potato cultivation process drew attention to the progressive farmers of Punjab and its neighbouring states. Farmers took the chance to learn about the latest products and technologies during presentations and live machinery demonstrations in the field.

Field Days India presented technology from soil preparation, seeding, crop protection, harvest and storage solutions. Furthermore, a workshop run by DEULA Nienburg on modern straw management was particularly well received by the visitors because of the need to fulfil governmental regulations banning burning of straw as from 2017.

The Managing Director of DLG International, Bernd Koch, and Bhavjit Singh Grewal, Chairman of Bj farms, were there to welcome the professionals on both days of the event. The concept and implementation of the third Field Days India in Punjab met with considerable approval among visitors, and they were very interested in the straw management process, particularly in that of paddy straw.

The agricultural sector in India contributes 17.6 per cent to the overall economy. Producing  45 million tons of potatoes a year, India is the world’s third largest potato farmer, after China and Russia.