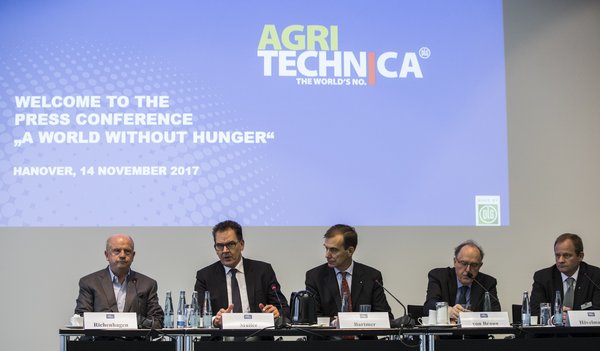 The participants in the DLG-BMZ panel discussion at Agritechnica in Hanover.
Photo: © DLG

The agricultural machinery group AGCO (Allis Gleaner Corporation) was at DLG-Agritechnica in Hanover in mid-November with a graphite-coloured “black giant”, a huge combine harvester with a corn tank holding over 17,000 litres. But Agritechnica is not just a showcase for large farmers and agricultural groups – it also fulfils its mandate to present solutions for innovative agriculture for the world’s small and medium-sized farms.

In this context, the German Agricultural Society (DLG) together with the German Federal Ministry for Economic Cooperation and Development (BMZ) invited the press to a meeting and panel discussion at Agritechnica.

The United Nations has set itself the goal of ending global hunger by 2030, noted the Federal Minister for Economic Cooperation and Development Dr Gerd Müller in the discussion, and in countries with the greatest shortfall in food some 80 per cent of agricultural land was farmed by small farmers. “This is why we need a green revolution from the bottom up,” Müller commented in Hanover, explaining how urgent the situation was in the light of six million hectares of fertile arable land being lost each year to salination, concreting and desert encroachment. With an eye to this year’s Agritechnica he stressed that agriculture in the South must increase digitalisation.

Professor Dr Joachim von Braun from Bonn University added that smartphones are used in Ethiopia as well. “The problem of hunger has become more complex, and needs modern and user-friendly agricultural machinery.” Prof. von Braun called for unrestricted utilisation of the opportunities of technical and breeding innovations, although adding that further development efforts also need to focus on issues such as energy, climate protection and financing modern technology.

He noted that many young farmers were only willing to take over their parents’ farm under certain circumstances. “Ideologising small farmers is the wrong approach! Supplying the world won’t work without structural change,” he stressed. However, this said, his was not to praise the virtues of large farms. If the average subsistence farm was increased from 0.5 to five hectares, agriculture would become attractive: farmers could make money on the market and a minimum level of technology could simplify the often hard agricultural labour input, Prof. von Braun emphasised, warning that the necessary agricultural revolution would not function without innovations.

DLG President Carl-Abrecht Bartmer maintained that training and knowledge transfer are the key to sustainable intensification of agriculture. They are the only way to increase yields efficiently, even without major expansion of the size of individual farms.

For Bartmer, Agritechnica is the right think tank for large and small solutions, which explains why DLG chose “Green Future – Smart Technology” as this year’s motto. In the 1970s development aid followed the approach of getting more land under the plough. Meanwhile, innovation in factor productivity has moved to the top of the research agenda.

Every nation has its individual basic stock of labour, capital and land, and modernisation can be individually customised, according to Bartmer, who added that DLG also took a practical approach to individual implementation, using field days and innovation competitions to form networks of farmers sharing their experience across national frontiers. A new concept.  As Bartmer emphasised, this is because the old top-down offer of innovations by the state should be finally seen as failed after decades without bringing success.

Agricultural machinery has also changed its view of the world’s agricultural system.  No longer are hi-tech solutions and digitalisation the sole focus. Technology needs to adapt to its users.

Prof. Dr Martin Richenhagen, CEO of the AGCO group, explained at the Hanover event that AGCO offers not only large-scale machinery for agriculture in Ukraine and Russia but also solutions for small farms in Africa.

For example, AGCO has a subsidiary in Algeria from which the company sends out replacement parts for its machines all over the continent. A lack of replacement parts is one of the biggest problems of mechanisation, according to Richenhagen, who emphasised that AGCO also provides training, so that mechanisation is preserved. In Zambia the group has a pilot farm for new technologies,

Richenhagen noted that the commitment to Africa is by no means accidental, given that Africa has the world’s largest areas of arable land which are still unused or whose potential has not been fully tapped. He commented that Africa not only has the opportunity to feed itself but could even become the bread basket to the world.