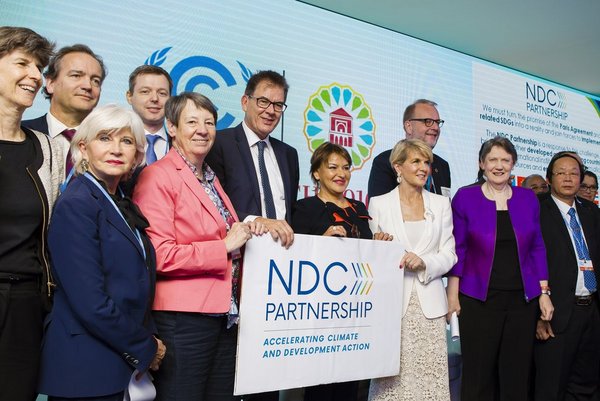 At the UN Climate Change Conference in Marrakech the German Federal Ministry for Economic Cooperation and Development (BMZ) announced it is supporting developing countries on the path to sustainable energy production and seeking to expand climate risk insurance.

The aim is to provide funds, expertise and technology to poor countries to enable them to achieve the national climate goals (Nationally Determined Contributions, NDCs) they have committed to under the Paris Climate Agreement. Minister Müller noted that the partnership’s founding members include more than 40 industrialised nations, developing nations and international organisations.

Support on the way to sustainable energy production

Among other programmes, BMZ is supporting the Africa Renewable Energy Initiative (AREI), with whose help enough electricity will be generated from renewable energies to replace some ten coal-fired power plants.

The Minister also announced further support for investment in the world’s biggest and most modern solar power station in the Moroccan desert. To date, the German contribution to the Quarzazate solar power station has totalled just under ERU 830 million, including concessionary-interest loans.

Minister Müller committed a further EUR 60 million in Marrakech. With an output of 580 megawatts, the solar power station will supply 1.3 million people with electricity from solar energy, avoiding the emission of 800,000 tons of CO2.

Every year, BMZ initiates climate protection programmes which save over 200 million tons of CO2 in all, equivalent to the emissions of 100 coal-fired power stations.

BMZ also intends to increase its contribution to climate disaster insurance. During the German G7 presidency in 2015, the G7 states decided to commit an additional EUR 400 million by 2020 for insuring particularly needy people against climate risks. BMZ now intends to provide an additional EUR 40 million in support to the InsuResilience Initiative, created at the G7 summit in Elmau. Together with additional contributions from other G7 states, this will increase the Initiative’s capital from USD 420 million to USD 550 million.

Climate risk insurance has proved a rapid source of aid in practice. After the devastating hurricane Matthew, which swept over Haiti among other targets a month ago, the Caribbean Climate Risk Insurance Fund CCRIF provided just under USD 30 millions in just two weeks to assist the affected population.

After an extreme drought in Mauritania, Niger and Senegal, the African Risk Capacity, in which Germany has a stake of over EUR 90 million, paid out some EUR 25 million. This helped fund emergency aid measures for around 1.3 million people and feed for about half a million animals.

The BMZ budget will increase by over EUR 1 billion next year to around EUR 8.5 billion which according to BMZ is an increase of 15% on 2016. The additional funds will be used primarily to tackle the refugee crisis in and around Syria and to create prospects for the future for young people in Africa.

Information on the climate partnership