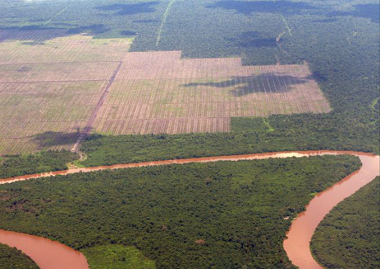 Up to 80 per cent of deforestation is due to the expansion of agriculture.
Photo: Andreas Brede/GIZ

In the context of its programme for sustainable agricultural supply chains and standards, Deutsche Gesellschaft für Internationale Zusammenarbeit pursues a Jurisdictional Approach. The interventions in this approach are not oriented on geographical delineations but on political and administrative borders such as those of districts or regions.

Forests provide a livelihood basis for more than 1.6 billion people. However, this basis is threatened, especially in the tropics. Alone over the last 50 years, more than half of the tropical rainforest has been lost. Estimates indicate that in some areas, up to 80 per cent of deforestation can be traced back to agriculture.

For this reason, in agreements such as the United Nations New York Declaration and the Amsterdam Declaration, the international community has committed itself to measures to counter this development. Germany’s Federal Ministry for Economic Cooperation and Development (BMZ) has also contributed to efforts, and already in 2016, it commissioned Deutsche Gesellschaft für Internationale Zusammenarbeit (GIZ) to draw up and test a concept for deforestation-free supply chains.

The concept is based on a “Jurisdictional Approach (J/A)”, which evolved from the landscape approach. Unlike the latter, it is not oriented on geographical delineations, such as those of a watershed, but on administrative units, for instance a district, a region or a province. Relating to administrative units enables a clear definition of responsibilities and competences of authorities and partners in co-operating and achieving goals. For only they hold the formal mandate to prescribe and implement sustainable land use.

Since mid-2017, the GIZ Programme for Sustainable Supply Chains and Standards has been running a pilot project on deforestation-free supply chains in Côte d’Ivoire. The jurisdictional approach that it applies is new, exciting and full of challenges in practice.

In the San Pedro region, the cash crops cocoa, India rubber and, to a lesser extent, palm oil are produced, which are responsible for deforestation in the area. The aim of the GIZ pilot project is to achieve a maximum of sustainability in the production of these agricultural raw materials and raise area productivity in order to avoid any demand for more land for cultivation in the forest areas.

At the same time, a land use plan is to be developed for the San Pedro region that integrates forests, agriculture as well as High Conservation Values (HCVs) – areas of particular environmental and cultural value – by protecting biodiversity and maintaining ecosystem services and cultural aspects of the local population.

The project’s political partner is the regional government in San Pedro. In addition, owing to the global dimension of supply chains, co-operation with the private sector is indispensable. It has been possible to win over both major international corporations and local timber companies as partners.

One challenge that remains for the implementation of the project is land use planning. This is due on the one hand to the high complexity of co-ordinating between government and private actors across different supply chains. On the other hand, owing to reforms in forestry legislation, a secure planning base has so far been lacking. Here, the jurisdictional approach takes more time.

More on deforestation-free supply chains in the new film (English)