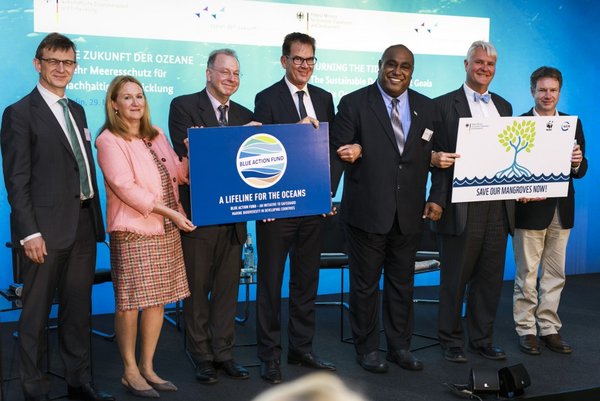 Federal Minister for Economic Cooperation and Development, Dr Gerd Müller, at the presentation of the two new initiatives, ‘Blue Ocean Fund’ and ‘Save our mangroves now’.
Photo: © BMZ/Phototek, Michael Gottschalk

The German Federal Minister for Economic Cooperation and Development presented the Blue Action Fund and the ‘Save our mangroves’ initiative at the first UN Ocean Conference in New York. This is a further contribution by Germany to international marine conservation

Pollution, overfishing and climate change are putting pressure on the world’s oceans, threatening the livelihoods of millions of people, particularly in developing countries. Many small island states have already been impacted by floods, with devastating consequences for their inhabitants. In this context Federal Minister for Economic Cooperation and Development, Dr Gerd Müller, presented two initiatives for protecting the oceans at the first UN Ocean Conference, held at the UN Headquarters in New York from 5-9 June: the ‘Blue Ocean Fund’ and ‘Save our mangroves now’.

The Blue Action Fund, created by the German Federal Ministry for Economic Cooperation and Development (BMZ), is an innovative fund for marine conservation and coastal protection. It will initially have funding of EUR 24 million and is aimed at NGOs involved in marine conservation and coastal protection. The first projects are concentrating on Africa, Latin America and the small island states.

According to a KfW press release, three projects will be financed in the current year, including the creation of 12 marine conservation areas in the waters off Costa Rica, Panama, Colombia and Ecuador. They aim to protect the livelihoods of almost 2,500 fishing households.

In another project in Mozambique, coastal fishing is to be made more sustainable with the involvement of local fishing communities, and an association of marine conservation areas established.

The second initiative concentrates on a very specific coastal ecosystem, the mangrove forests. 35 per cent of mangrove forests have already been lost worldwide, despite the key functions mangroves have for climate, biodiversity and food security. They store three to five times more CO2 emissions than forests on land and form a natural protective wall against storm surges and tsunamis. Together with the World Wide Fund for Nature (WWF) and the International Union for Conservation of Nature (IUCN), BMZ is now starting a mobilisation campaign to draw attention to this important issue.

With the new initiatives, the Ministry is pursuing implementation of its ten-point action plan for marine conservation and sustainable fishing. Federal Minister Müller had already presented the plan, for which a total of EUR 180 million has been made available, in May 2016.