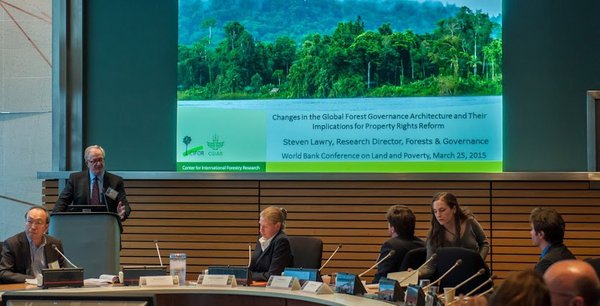 The structure of the conference allowed for detailed technical presentations and rich discussions.
Photo: © Nataliya Makarenko

BMZ/GIZ at the World Bank conference “Land and Poverty 2015”

Women’s land rights and the Voluntary Guidelines on the Responsible Governance of Tenure of Land, Fisheries and Forests in the Context of National Food Security (VGGT) were amongst the main issues at the 2015 Land and Poverty Conference at the World Bank headquarters, co-founded by the German Ministry for Economic Cooperation and Development (BMZ). For the first time an Innovations Fair and MasterClass clinics complemented the conference.

Under the overall theme “Linking Land Tenure and Use for Shared Prosperity” the World Bank held its 16th Annual Conference on Land and Poverty in Washington D.C., USA, from the 23rd to the 27th March. As indicated in the conference programme booklet, “the topic highlights that, while land tenure affects the distribution of assets between men and women, generations, and social groups, patterns of land use have far-reaching implications for welfare and other socio-economic outcomes at household, community, or landscape level”.

More than 1,000 representatives from 123 countries from governments, civil society, academia, development community, and the private sector attended the event to discuss issues of land policy and land management. The aim of the Land and Poverty conference is to foster dialogue and sharing of good practices around the diversity of reforms, approaches and experiences in the land sector that are of concern to communities, land practitioners and policy-makers at all levels.

Substantial reference was made to gender aspects and the central importance of women’s land rights in numerous papers, debates and the programme as a whole. Private enterprise investment in land, in a responsible and sustainable manner and both by international and domestic investors, and the implementation of the internationally Voluntary Guidelines on the Responsible Governance of Tenure of Land, Fisheries and Forests in the Context of National Food Security (VGGT) were perceived as outstandingly important topics throughout the conference.

The structure of the conference allowed for detailed technical presentations and rich discussions focusing explicitly on land policy issues. This year, the event included two new exciting components. An Innovations Fair concentrated on how advances in technology and open data can help improve land governance at scale. And during  a MasterClass learning day, sponsors and partners offered hands-on MasterClasses or clinics in a classroom-setting to familiarise participants with cutting edge concepts, tools and techniques developed to help policy-makers.

A wide range of German organisations, both non-governmental and governmental and from academia and research, were represented at the conference. Once again, the BMZ, together with other donors, co-funded the event, which can be seen as the most important gathering in the land sector world-wide. The BMZ also hosted a German Reception to strengthen ties between numerous land partners and programmes and projects run by the ministry and “Deutsche Gesellschaft für Internationale Zusammenarbeit” (GIZ). GIZ was one of the conference co-organisers and facilitated participation of partners from Asia, South-Eastern Europe and Africa.

The BMZ and GIZ were actively engaged in various sessions, for example the one on the nexus of land tenure and drug cultivation and a session on how investors´ home countries can promote responsible agricultural investments, both chaired by BMZ. In addition, GIZ presented a number of papers and chaired several sessions. Furthermore, the BMZ and GIZ participated in a meeting of the Global Donor Working Group on Land, where an overview of on-going work to develop operational guidance for the private sector to implement the VGGT was provided. The session aimed at promoting the co-ordination of the different initiatives towards a joint and single set of guidance for the private sector, focusing on the synergies of the multiple processes underway.

The BMZ also chaired the post-conference session “5th physical meeting of the Global Donor Working Group on Land”, which allowed the group to discuss the implementation steps of their work plans, along with numerous internal co-ordination aspects and to update each other on their on-going work streams and positions. The Global Donor Working Group on Land was established in the summer of 2013 to improve global coordination on land and provide stronger support to lesson learning at international level. The Global Donor Platform for Rural Development hosts the group, which is currently chaired by the BMZ.