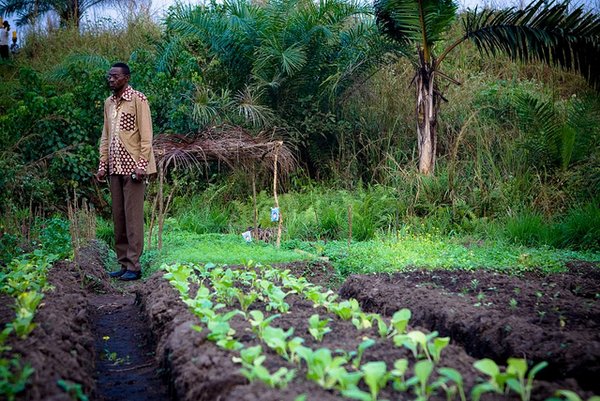 The DR Congo has very fertile soil, but it is lying fallow in wide areas of the Kivu region because of the armed conflicts.
Photo: © Weiron/flickr

Under a commission for the German Federal Ministry for Economic Cooperation and Development (BMZ) KfW Development Bank is financing small-scale agriculture in the North and South Kivu regions of the Democratic Republic of the Congo (DR Congo), with the goal of securing the food supply for 180,000 people, creating new jobs and reintegrating returning internally displaced persons.

Under a commission for the German Federal Ministry for Economic Cooperation and Development (BMZ), KfW Development Bank is supporting food security for exiles and returning internally displaced persons (IDPs) and their host communities and families in the North and South Kivu regions with EUR 35 million.

KfW explains the project by noting that these people had lost the basis for their existence and the source of their incomes as a result of the armed conflicts in the DR Congo. Output from subsistence farming, KfW says, is often not sufficient for personal needs; currently, only 3 per cent of the land is farmed.

In its press release, KfW explains that the very fertile soil offers ideal conditions for productive agriculture and cultivation of manioc, sugar cane, coffee, palm oil, caoutchouc and bananas. With improved cultivation and storage techniques and better marketing, the supported small farmers could increase their income even from their small plots, and live from their own farming in future.

“DR Congo is one of the world’s poorest countries and in the east, it has the most IDPs worldwide. If North and South Kivu can reactivate the country’s granary, that would be a major contribution towards stabilising the former conflict area and a great step away from emergency aid and towards self-help for 180,000 people,” says Professor Joachim Nagel, member of the KfW Group’s Executive Board.

The promotional measures are being implemented through the World Food Programme (WFP) and the United Nations Food and Agriculture Organisation (FAO), which both have staff active locally, have long years of experience in DR Congo and work with the local farmers’ organisations.