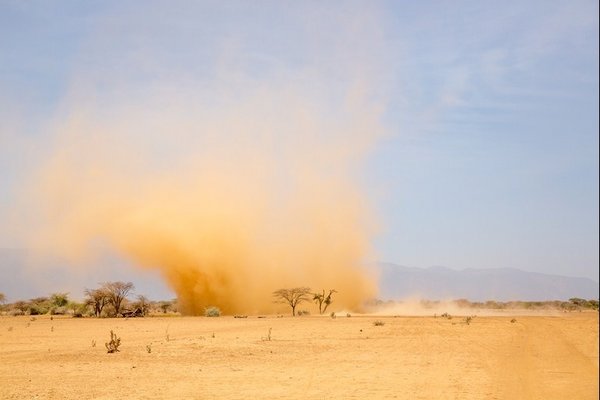 A dust storm during the dry season in Olkiramatian in the Kenyan Rift Valley.
Photo: © Georgina Goodwin

“Soil matters – and is a key element of climate smart agriculture.” This was the topic of a side event held at the German Pavilion on the occasion of the UN climate conference in Paris, France, on the 5th December 2015. Participants discussed the importance of soil rehabilitation and sustainable land-management for supporting food security, as well as for climate change adaptation and the provision of mitigation co-benefits.

In the context of the side event, BMZ Parliamentary State Secretary Thomas Silberhorn, Thomas Silberhorn Thomas Silberhorn announced financial support totalling 13 million euros for the IFAD-led Adaptation for Smallholder Agriculture Programme (ASAP). “Given that in the course of this decade, desertification is expected to drive 50 million people from their home, soil conservation is gaining particular significance in combating climate change,” Silberhorn explained, adding that sustainable soil management made a big contribution to food security, strengthening the adaptability of smallholders and reducing greenhouse gas emissions.

Each year, six million hectares of fertile arable land is lost through soil erosion, diminishing soil quality and desertification. More than half of the agricultural areas world-wide are affected by soil degradation. Climate change is aggravating this phenomenon, and the consequences of this are above all borne by smallholders. “These smallholders need our support to adapt to the drastic changes in their natural environment,” Silberhorn explained in Paris.

BMZ intends to stop or at least reduce the world-wide loss of valuable arable land in cooperation with IFAD. This collaborative effort is intended to encourage other donors to join forces with Germany.