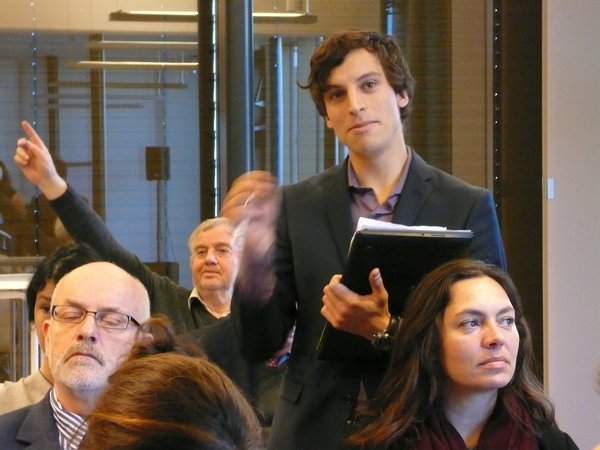 Between community seedbanks and crowd-funding

Access to quality seed and appropriate crop varieties as well as legal protection tools for commercial plant breeders and farmer breeders were at the centre of a GIZ expert talk on seeds and sustainable agriculture.

Small-scale agriculture is already making an important contribution to food security and income generating in the rural areas of developing countries. However, its potential is far from exhausted. One important input to enhance its productivity is access to quality seed and appropriate crop varieties. This topic and legal protection tools for commercial plant breeders were at the centre of an expert talk on seeds and sustainable agriculture in Bonn, Germany, in mid-December. The event was organised by Deutsche Gesellschaft für Internationale Zusammenarbeit (GIZ).

“The present supply of varieties neglect an important farm potential, as varieties are produced for cropping mainly under optimal growing conditions with input of fertilisers and pesticides,” said Johannes Kotschi of Agrecol at the expert talk. And he continued: “Much more crop varieties would be required to enable farming under difficult or even marginal environmental conditions.” These areas are mainly farmed by smallholders, and for such marginal lands, crop variety supply is insufficient. For all these farmers as well as agriculture in general to generally benefit from more crop varieties, region-specific adapted varieties instead of mass products, agricultural expert Kotschi maintains.

This can be facilitated by greater diversity in feeding objectives, for example with plant breeding for new cropping systems like maize-bean intercropping or breeding for neglected crops like minor millets or for protein-rich crops like amaranth. Free access for smallholders to quality seed is a further crucial aspect. Kotschi believes that open-source breeding with sibling selection is suitable for this purpose and maintains that the “application of open-source licensing would allow building up a common pool of open-source seeds”. However, he adds that breeding aimed at more diversity and region-specific varieties also requires new financing concepts, for the royalties to be reckoned with are not sufficient. Kotschi points to options such as integrating the whole value chain as well as crowd-funding.

Ronnie Vernooy of Bioversity International Community explained at the expert talk that seedbanks played an important role in providing smallholders with seed. Many of them had long dispensed with pure seed conservation facilities and were working more and more towards access and availability of quality seeds for smallholder farmers. Further activities of seedbanks include promoting farmers’ rights and rural development.

This new multi-functionality is one of the strengths of community seedbanks, Vernooy maintains. Lately, they have progressed from local to national institutions. For example, the first national association of seedbanks was established in Bangladesh, two years ago. It emerged from the linking up of local and district seedbank networks with the farmers movements. Supported by Bioversity International, South Africa has now also developed a national seedbank strategy. “There are more and more governments now which support community seedbanks and are attempting to integrate them in a national conservation strategy”, Vernooy said at the meeting, adding that this trend was “a result of climate change.”

Professor Carlos Correa of the University of Buenos Aires and South Centre, Argentina, presented an option to combine the powerful protective rights for commercial plant breeders and the interests and rights of farmers in developing countries in a single system. This proposal aims at a scope of protection or a scope of remuneration which is broader than regulating affairs via the International Union for the Protection of New Varieties of Plants – UVOP. This intergovernmental organisation, which was established in 1961, has a membership of 72 countries, including a large number of developing countries, as well as the African Intellectual Property Organization and the European Union. However, the UPOV Convention, which was revised in 1991, is controversial particularly with regard to developing countries since it is relatively rigid and severely restricts exceptions granted for farmers.

“The scope of this regime would also cover non-uniform varieties as farmers’ varieties in general are not uniform, as well as some cases with institutions that breed varieties which are heterogeneous. Besides this, small-scale farmers will be exempted from any kind of obligation”, Correa explained. In detail, the model proposes three categories with different standards. The highest level has the UPOV standard. The second level considers new farmers’ and breeders’ heterogeneous varieties, and the third traditional farmers’ varieties. However, Correa added, only those countries that so far had no sui generis system – i.e. a system they themselves had developed to protect plant breeds – could introduce the proposed model. And currently, the latter comprise the least developed countries. All members of the World Trade Organization (WTO) are obliged to provide a protection for plant varieties. This can be accomplished via patents or via an effective sui generis system.

Human rights must not be violated

The relations between the UPOV Convention, especially UPOV 1991, Farmers’ Rights enshrined in the International Treaty on Plant Genetic Resources for Food and Agriculture (ITPGRFA) and human rights were at the centre of agricultural scientist Anja Christinck’s presentation. “It is not the question whether the UPOV Convention is promoting or hindering the right to food or other human rights, it is not about whether there are any benefits for any sort of people, but it is about differentiating for which people which kind of progress can be made,” said Christinck. However, it was above all important to ensure that human rights were not violated by the introduction of plant variety protection laws.

Christinck therefore recommends that countries in the process of introducing plant variety protection laws clarify the objectives of introducing such laws and assess which type of plant variety protection law meets these objectives. This clarification should be based on the assessment of the situation and the needs of the farming sector in the country. It should consider relevant treaty obligations and also consider the discretion required for harmonious implementation of different treaty obligations into national law. The need for the participation of those holding rights should be clarified as well.