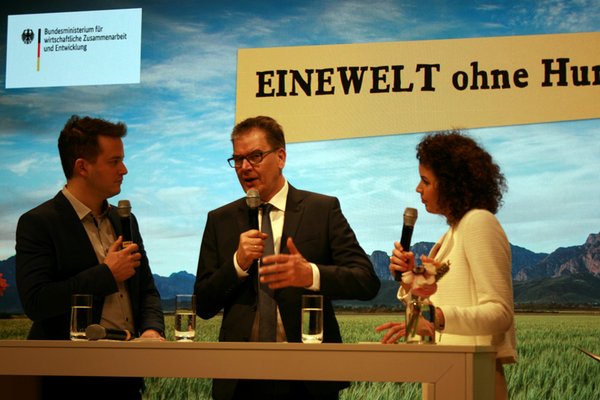 “One World without hunger is possible – with fair purchasing and fair production” is the slogan of the German Federal Ministry for Economic Cooperation and Development (BMZ) at the International Green Week in Berlin. From the 19th to the 28th January 2018, the BMZ is welcoming visitors at the exhibition with a range of events and activities appealing to consumers.

The BMZ, together with 24 partnering NGOs of the ONE WORLD – No hunger initiative, is drawing attention to sustainability and fair trade at the International Green Week (IGW) in Berlin, Germany. The key aspects of the initiative are fighting hunger and malnutrition while protecting natural resources, creating future prospects as well as income generation and employment in rural areas, especially for young people. Up to 2020, the measures against malnutrition are to reach more than 19 million people. At the same time, 14 Green Innovation Centres are to raise the income of 860,000 family farms by more than 400 million euros. Each year, the BMZ invests about 1.5 billion euros in nutrition and rural development. Next to the European Union, Germany has become the world’s most important donor for rural development and combating hunger in Africa. At the exhibition, the BMZ seeks to stimulate the consumer to take responsibility and is demonstrating how civil society, the churches, the public and the private sector can influence a fair and sustainable production of goods in daily use.

Germany is the second most important importer of raw cocoa after the Netherlands (net imports 2015/16: 420,000 tons). Germany is also the world’s leading exporter of chocolate and chocolate products (829,707 tons in 2015/16). Half of Germany’s cocoa imports come from Côte d’Ivoire. The second largest supplier is Nigeria, at 17 per cent, followed by Ghana at 15 per cent. Hence, cocoa is one of the most important agricultural commodities world-wide and one of the most important agricultural export goods in West Africa, giving it a high potential for the whole region. In addition to creating jobs in production, the sector provides employment opportunities in processing. However, low income below the poverty line, missing organisational structures and lack of transparency of the supply chains are among problems the cocoa farmers are facing. Furthermore, child labour levels are high in the sector, and so are deforestation rates. At the IGW, the cocoa value chain is demonstrated to visitors, and with virtual reality glasses, they have the opportunity to walk through an African forest and learn how cocoa is produced and harvested.

In 2018, the 15th Green Innovation Centre will be founded in Côte d’Ivoire. The objectives of the project are to:

Lessons learnt from the Green Innovation Centre in Cameroon, which also promotes the cocoa value chain, can contribute to a quick start. Approaches comprise the provision of high quality seed, solar dryers for harvested beans, modern warehouses for the cocoa co-operatives, production plants for processing into cocoa powder and butter as well as certification for organic agriculture and fair trade.

From 2009 to 2017, the BMZ supported the "Competitive African Cotton Initiative" (COMPACI). Among the partners were the Aid by Trade Foundation (AbTF) and the Bill and Melinda Gates Foundation. The follow-up project "Cotton Expert House Africa" has already begun, builds seamlessly on its predecessor COMPACI and seeks to enhance the integration of farmers in fair supply chains to Germany. It is active in 16 African countries, and 1.2 million cotton producers are being trained, at least 360,000 of them women. The household incomes of the participating farmers have increased by 30 per cent net.
At the IGW, the BMZ is demonstrating the hard work behind commonly used goods and giving visitors an idea of the long manufacturing line from a cotton field to a T-shirt.
Furthermore, African specialities such as insects can be tested. Daily live cooking shows and a programme on stage bring African insights to the visitors. African singers and songwriters are presenting their music, and panel discussions about soil, women, coffee, cocoa, cotton as well as Ethiopian traditional coffee ceremonies are taking place.