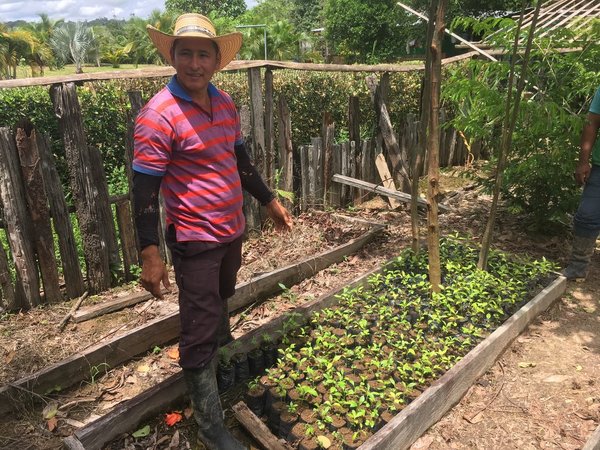 Agroforestry as an alternative to drug crop cultivation in Colombia

Coca farmers in rural areas are often affected by poverty and a lack of access to legal markets. Furthermore, in Colombia, illicit coca crops cause widespread deforestation. Deutsche Gesellschaft für Internationale Zusammenarbeit (GIZ) GmbH is carrying out pilot projects in drug cultivation regions in Colombia to counter deforestation and promote sustainable development for the people living in these areas.

In Colombia, coca plants were grown on around 171,000 hectares in 2017. While the drug economy is rich in profits for high-level traders, the farmers growing the illicit crops often live in poverty in remote, marginalised rural areas. Often there is no alternative to the drug economy for coca farmers because they lack access to markets for legal products, rendering them dependent on the illicit market.

Despite the socio-economic consequences, the drug economy in Colombia also heavily affects the environment: Illicit coca cultivation is one of the causes of deforestation of natural rainforests in Colombia. Around 220,000 hectares of forest were cleared in 2017 alone, 65 per cent of which in the Amazon region.

Since 2016, REDD+ (Reducing Emissions from Deforestation and Forest Degradation in Developing Countries) and the GIZ Global Partnership for Drug Policy and Development (GPDPD) have jointly carried out five pilot projects in the Colombian Amazon region (in Putumayo, Caquetá, Guaviare and Meta), two of them in close co-operation with the country office of the United Nations Office on Drugs and Crime (UNODC). The objective is to counteract the harmful effects of coca cultivation on the environment and for people living in drug crop cultivating areas. On behalf of the German Federal Ministry for Development and International Cooperation (BMZ), and in co-operation with the Colombian Ministry of Environment and Development (MADS), the one- to two-year pilot measures are aimed at curbing deforestation and promoting sustainable management of forest areas in coca-growing regions.

The projects promote the establishment of agroforestry and silvopastoral systems, which integrate the cultivation of crops, harvesting of fruits in natural forests, improving sustainability in cattle ranching, conservation agreements and the growing of trees to ensure reforestation. Thereby, ecologically sustainable, lucrative and legal sources of income for small farmers can be created to reduce their dependence on the drug economy.

Getting everyone involved – ensuring responsibility

The GIZ projects are based on the ‘alternative development’ (AD) approach to drug policy that takes on a development perspective and considers development deficits the actual root causes of drug economies that need to be relieved first. Furthermore, it assumes that affected communities need to be closely involved in the processes aimed at improving their socio-economic conditions.

Therefore, local authorities and producer associations as well as the local population are integrated in the projects in order to strengthen their role in the sustainable development of their communities. In the context of forest conservation agreements, participating communities voluntarily commit themselves to permanently protecting defined forest areas from deforestation. Since the beginning of the measures, around 1,600 hectares of forest have already been protected by such agreements. In addition, more than 18,000 domestic wood and fruit trees have been newly planted.

The pilot projects are also dedicated to the sustainable cultivation of alternatives to coca, such as local fruits, cocoa, açaí, arazá and copoazú. In some measures, cocoa farmers and açai producers are supported in having their products certified and in concluding trade agreements with local companies in order to achieve fair prices and the continuity of these activities as an alternative.

Other projects train smallholders in sustainable management and environmentally conscious farming practices. Around 200 families are involved in the measures, which act as multipliers in their communities. As a result, the projects now reach around 1,200 people living in the region.