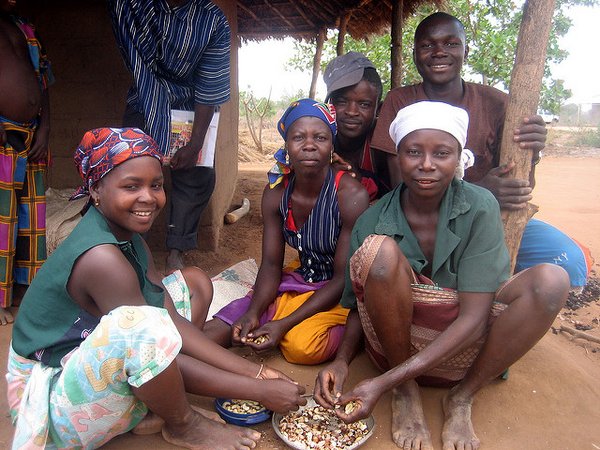 Through the Cashew Initiative the trained smallholders could raise their income by 120 USD per year.
Photo: Erik Cleves Kristensen (flickr)

The goal of BMZ’s Cashew Initiative that was launched seven years ago is to raise the income of more than 400,000 farmers in five countries of Africa, to improve their competitiveness and increase further processing of the nuts in Africa so that more value added remains in the producing countries. The target countries are Benin, Burkina Faso, Côte d’Ivoire, Ghana and Mozambique.

Through the Cashew Initiative the trained smallholders have raised their income by 120 US Dollars (USD) per year, states BMZ. This is an enormous increase considering that the annual income of a rural smallholder ranges from just 120 to 450 USD.  The nuts grown now have a better quality and up to 80 per cent higher yields per hectare are obtained. This makes the farmers far more competitive internationally. The farmers, most of whom are not organised in associations, receive training through the Initiative in entrepreneurial skills, such as how to negotiate with traders.

"The factories promoted by the Initiative have increased their processing capacities six-fold and local processing quantities have doubled from five to ten per cent” stated the BMZ. Domestic further processing of nuts is being developed through the Initiative. Almost half of the cashew production worldwide is produced by 1.5 million smallholder cashew farmers in Africa.

In the third phase now underway, BMZ aims at extending the project to additional countries, thereby reaching at least one million smallholders. The Cashew Initiative is part of a multicountry programme which, in addition to cashew nuts, is also promoting the value chains of cotton, cocoa and rice.