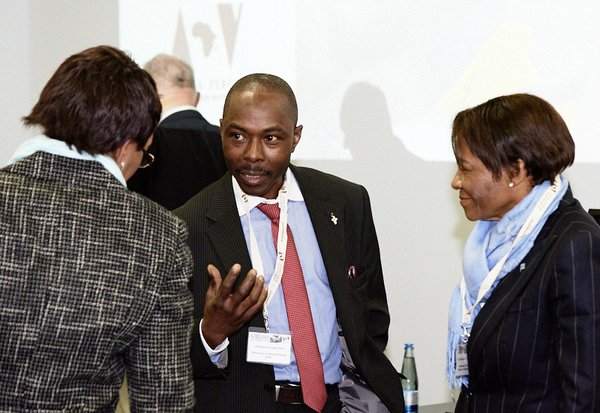 The participants demonstrated a great desire to engage in closer co-operation.

Africa – the continent of opportunities

In the run-up to this year’s EuroTier, the world’s leading animal production trade fair, which was held in Hanover/Germany in mid-November 2016, the focus was on Africa. Together with the German Agricultural Society, the German-African Business Association and the German Agribusiness Alliance had organised the 2nd German-African Agribusiness Forum under the topic "Challenges and Opportunities along the Value Chain".

The organisers welcomed almost 100 high-ranking representatives from international agribusiness, administration, ministries and the consulting and agricultural extension services industry. The participants included an encouragingly large number of embassy representatives from countries in Africa such as Benin, Botswana, Ethiopia, Cameroon, Kenya, Rwanda, Zambia, Senegal, Zimbabwe, Tunisia and many others. The attendance of a numerous representatives of German businesses underscored the considerable interest taken by German agricultural firms in African agriculture.

In three separate panels, the discussion addressed the issues of “Livestock – Dairy, Meat and Poultry Processing Industry in Africa” and “Processing, Packaging, Storage and Transport” as well as the role of banks, investment funds and public-private partnerships with a view to “Financing Agricultural Projects in Africa”. The forum demonstrated the considerable interest taken in the topics and a great desire to engage in closer co-operation.

Many presentations either directly or indirectly addressed the issue of why several African countries nowadays have such a high demand for food imports from non-African countries. There are certainly a wide range of reasons for this. For example, many experts argue that e.g. grain traded on the world market, such as rice, is often on offer cheaper and of better quality than is the case with rice grown in Africa. Major food corporations regret that African products are frequently too expensive and substandard in terms of quality and hygiene. It is for this reason, and also because of production technology aspects, that they often buy outside Africa, in spite of the food then often being offered on the African continent.

And yet many experts agree that Africa would be perfectly capable of supplying its own food. There is certainty that with appropriate efforts and investments, a major share of this demand could be met within Africa itself, which would offer African agriculture significantly better development prospects.

In her closing remarks, Maria Flachsbarth, Parliamentary State Secretary at the German Federal Ministry of Agriculture, referred to Africa as a “continent of opportunities” – especially also for German firms. Flachsbarth ensured the African delegates that the Federal Government would lend its support in developing agriculture in the respective countries. One would hope to see more of such business-oriented conferences.