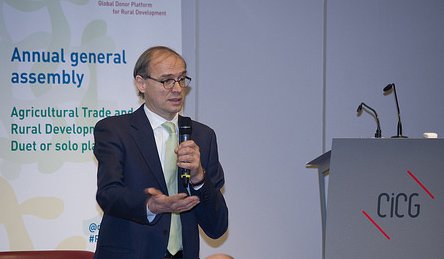 Discussions at the General Assembly 2016 of the Donor Platform for Rural Development focused on the need to identify a common purpose for a coherent agenda on rural transformation that will support economic growth and job creation, while promoting agricultural trade.

The critical role that the private sector can play in conjunction with public investments and enabling policies in contributing to poverty reduction was the focal point of discussion during the recently concluded Annual General Assembly (AGA) of the Global Donor Platform for Rural Development in Geneva, Switzerland, in January 2016.

The Annual General Assembly 2016 was hosted by Swiss Development Cooperation Agency (SDC), one of the board members of the Platform. Each year, the 38 members of the Platform, under the leadership of the hosting country, decide what will be the most relevant topic in their development policy portfolio for the next year. Based on this decision, the 2016 Annual General Assembly focused on the topic of policy coherence between agricultural trade policies and rural development.

In his welcome address, Pio Wennubst, Vice-Director, SDC, noted that the 2008 food crisis demonstrated the failure of the contemporary business model for staple food systems. Highlighting the need for a new model that supports direct contract farming, Wennubst noted that there was a general incongruity in donors’ approaches. For instance, trade was being pitted against food security. This had to be overcome.

According to Wennubst, the 2030 Agenda opens up opportunities in this direction for greater policy coherence, given its universality principle. Moreover, in view of the increasingly limited resources, including water, the future will likely enforce a different business model, one that takes the sustainability question into account.
“To decrease vulnerability towards food crises and increase sustainability, new targets must be defined including a much larger share of locally produced food,”  Wennubst stated.

In addition in her keynote speech, Evelyn Nguleka, president of the World Farmers Organisation’s (WFO), emphasised the importance of the Policy on Trade that the Organisation had agreed on in 2013. The common policy addressed several challenges that farmers were facing, including pressure to produce more and more food in a sustainable manner.
“Today, farmers are under pressure to produce high quality food for a growing population in a sustainable manner, but with finite resources,” Nguleka noted.

She was quick to point out that price volatility, extreme climate change shifts and most of all, the availability of water posed key challenges to future food supply. These are challenges that in her opinion can only be successfully tackled through joint actions with donors and partners.

Nguleka identified several action areas, including education and training and making farming lucrative.  Schooling and training could boost farmers’ motivation to use new technology and increase production, but also in this way allow them access to bigger markets and other resources. As the representative of the WFO, Nguleka made some recommendations to the Platform to put farmers in the centre of policy discussions, to support national governments to formulate policies supporting market access for farmers, to increase investments in agriculture and to build up efficient agricultural infrastructure.


<- Back to: From our partners