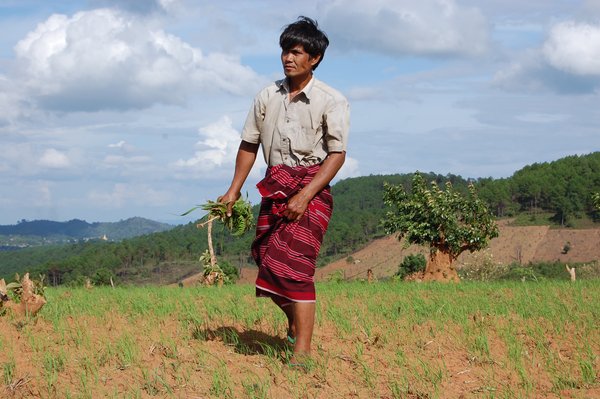 Farmers in drug crop cultivation regions are caught in a vicious circle. They work in remote areas and are often dependent on criminal networks. It is also difficult to quit the cultivation of illicit drug crops as there are no markets for legal alternatives. The farmers lack farming knowledge and get no government support. “Alternative Development” (AD) projects can contribute to opening up new perspectives for farmers

For the past three decades, Germany has been promoting Alternative Development as part of its drug policy and development co-operation activities in South America, Asia and, since recently, North Africa. One  example is the support of the UNODC (United Nations Office on Drugs and Crime) in Peru, Bolivia and Myanmar by “Gesellschaft für Internationale Zusammenarbeit” (GIZ) on behalf of the German Federal Ministry for Economic Co-operation and Development (BMZ). The AD approach to development co-operation has been strengthened significantly. In future, international drug policies are to take farmers more into consideration.

Representatives of the international community met at the UNGASS (United Nations General Assembly Special Session on the World Drug Problem) in New York, USA, this April.
Having first taken place in 1998, the next conference was initially scheduled for 2019. But the presidents of Mexico, Columbia and Guatemala urged for an earlier meeting of the international community, because these countries are challenged by an increasing violence and the negative effects of current – mostly repressive – drug policies. The final document of the UNGASS is meant to become a “guidebook” for international drug policy in the years to come.

At the UNGASS, the national governments not only agreed to declare “Harm Reduction” a new common goal. A majority also declared that law enforcement practices should be reformed and become more moderate. In numerous countries drug farmers are exposed to imprisonment and to losing their belongings, not to forget their farming income. Furthermore, governments and civil society of the affected countries demanded drug policy to be clearly focused on the Sustainable Development Goals.

The final document of the UNGASS outlines the concept of Alternative Development in a special chapter – this is an achievement of the German delegation. Headed by Marlene Mortler, Germany’s Drug Commissioner, the delegation negotiated jointly with the European Union and international partners.
The new chapter strengthens those aspects of drug policies that regard the cultivation of drug crops as the result of missing development perspectives.

Alternative Development (AD) had already been on the agenda of the annual CND (Commission on Narcotic Drugs) in Vienna, Austria, in March this year. The EU and others were able to include additional elements such as chapters on human rights, on new challenges such as the so-called new psychoactive substances (NPS), on the online trade of drugs and on Alternative Development.

There is a growing interest in the AD approach that a number of development agencies (including GIZ on behalf of the BMZ) have developed in the past decades in the Andean coca and in the Asian poppy cultivation areas. More and more states – also those in which cannabis is grown – are looking for alternatives to repressive policies, because they mostly lead to shifts in production and destroy the livelihoods of many farmers. German development co-operation takes on a leading role,, supporting the countries concerned on the way to alternatives to the drug problem.

AD is one basic principle in United Nations drug policy. It aims to help drug producing countries to prevent and reduce the illegal cultivation of drug crops.. AD helps to establish sustainable income opportunities in the affected communities. Examples of AD include the cultivation and marketing of coffee, cocoa or other agricultural goods.

However, AD is not  only about replacing one product with another. It also implies improving the socioeconomic standards of the farmers. They are to gain long-term perspectives for a better life. Only when alternative income opportunities, access to legal markets, improvement of public services, political participation and access to the use of land are secured can AD be successful.

The international community now has three years to implement the new goals. In 2019, delegates will again convene in New York to measure progress and reform processes.