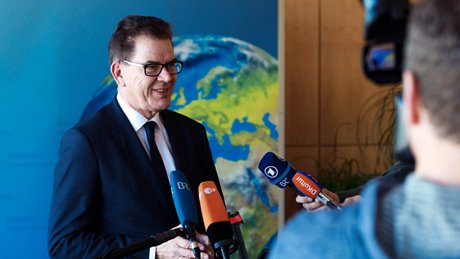 A new Marshall Plan with Africa

The Federal Ministry for Economic Cooperation and Development has presented a ‘Marshall Plan with Africa’ as part of Germany’s G20 Presidency in 2017 under which ‘Reform-oriented partner countries’ will receive greater support. Federal Minister Gerd Müller also called for more business-sector investment in Africa.

In mid-January, Federal Minister for Economic Cooperation and Development, Gerd Müller, presented the outline of a ‘Marshall Plan with Africa’ to the Committee for Economic Cooperation and Development of the Bundestag. ‘We need an entirely new dimension of cooperation with Africa,’ Müller said. ‘We want to enter into reform partnerships with champions of reform. Whoever is combating corruption, establishing tax systems, investing in education and pushing for gender equality can expect more support from us. Development policy alone is not the answer, Africa needs jobs, which only the private sector can create –  local added value instead of exploitation. The opportunities in Africa are vast, including for German business,” Minister Müller emphasised when he presented the project in Berlin.

Invitation to dialogue with African partners, politicians, universities and research and Society

The outline of a Marshall Plan with Africa sets the starting point for a discussion over future cooperation with the continent, according to the German Federal Ministry for Economic Cooperation and Development (BMZ). The African and European partners in German development policy, plus the private sector, universities and research, church organisations and policy makers are all invited to discuss and refine the proposals and approaches described in the outline. The BMZ will offer several events in this respect and invites all to join an online-dialogue.

Müller went on to announce that in implementing this paradigm shift, BMZ will provide more support to reform-oriented partner countries than in the past. It intends to invest 20 per cent of German development funding for Africa in the development of these countries. In this way, German development policy will create incentives for autonomously-designed sustainable development.

In BMZ's view, 2017 will decisively shape the future in Africa policy. The European Union is working on a new Africa concept. Africa is the primary focus of the German G20 presidency. A further focal issue is illegal financial flows, which cost developing countries up to USD 100 billion a year.