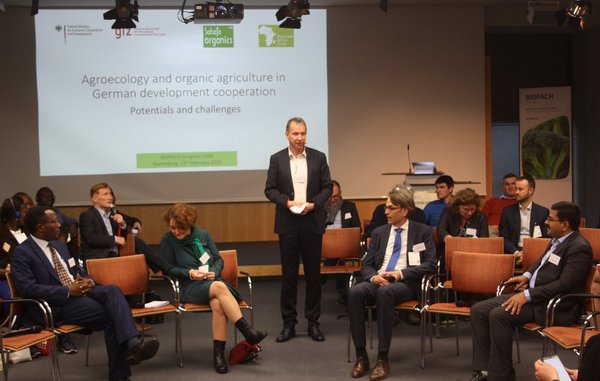 Agroecology as a paradigm for development

Agroecology is a research approach which describes the principles and practices of sustainable agriculture and a sustainable food system. The concept also ensures economic emergence from poverty. In contrast to ecological agriculture, agroecology does not have set rules. At BioFach 2020, experts debated whether agroecology can serve as a paradigm for development.

The UN Food and Agriculture Organization (FAO) held the first symposium on agroecology back in 2014, which described the social, environmental and economic aspects of the principles of a sustainable agriculture and food system.

These cover specific systems of food sovereignty unattached to a given location, which are very comprehensively described, from access to resources and a recycling economy through to a participatory approach. Even so, the term is frequently used imprecisely in policy for rural areas and in agriculture.

At the end of February 2020, experts and practitioners meeting at BioFach in Nuremberg debated whether agroecology can serve as a paradigm in the orientation of development cooperation.

Björn Niere from the German Federal Ministry for Economic Cooperation and Development (BMZ) acknowledged frankly that agroecology is “merely a niche”. Over ten per cent of agricultural projects do not follow the FAO principles. The term still requires explanation, and should replace other terms such as “sustainable development”. The Agenda 2030 with its 17 goals most closely approaches agroecology. However, in practice the focus is still too often on the producer side.

David Amudavi from Biovision Africa Trust in Kenya observed critically that most projects in rural areas are implemented in isolation from each other. What is needed is an “upgrade” to an entire life system which needs to improve. Amudavi calls for a focus on entire value chains which include plant and animal production and take human health into account.

Basavanne Somesh from India describes how this can work in detail. Ten years ago, he formed the company Sahaja Organics for various varieties of rice, legumes and spices. The original ten families, who own the company and have personally taken up the business from production through to marketing, have grown into 600 families today, producing, processing and marketing products certified as organic.

The emphasis is on farmers in urban regions, such as Bangalore. According to Somesh, the biggest hurdle was financing the project at the start. Over time, the farmers learned from each other, and the company got bigger. Initially, it was able to tap local lenders and build on the technical assistance of the Deutsche Gesellschaft für Internationale Zusammenarbeit (GIZ) GmbH.

GIZ sees itself more as a service provider in this, as Barbara Schweiger from the Global Donor Platform for Rural Development emphasised. In the interests of agroecology GIZ has created a platform where actors can network and private-sector companies can be incorporated into public cooperation. The basis for agricultural practice is “good professional practice” and integrated plant protection. Farmers must be convinced of new approaches and solutions with the help of data.

She spoke to rural21.com about this at the event, and established that reliable basic data is lacking in many countries. Yield figures, marketing opportunities and purchase prices are either non-existent or non-transparent. For GIZ, creating a data basis is fundamental in projects with farmers.

No fixed paradigm –various routes to development are open

Agroecology does not follow a fixed paradigm. There are various routes to development for the global North and South, as Björn Niere summarises. Implementation requires raising awareness among policy makers and civil society.

Views diverge at this point. Most of the world’s farmers are small-scale producers, although altogether they farm only ten per cent of agricultural land. The experts discussed with the public whether involvement of multinational companies in the agricultural sector might not have greater environmental effects. On one side, actors are sceptical about the ethical values of large companies, on the other hand, agroecological orientation by the business model could help in achieving the goal.