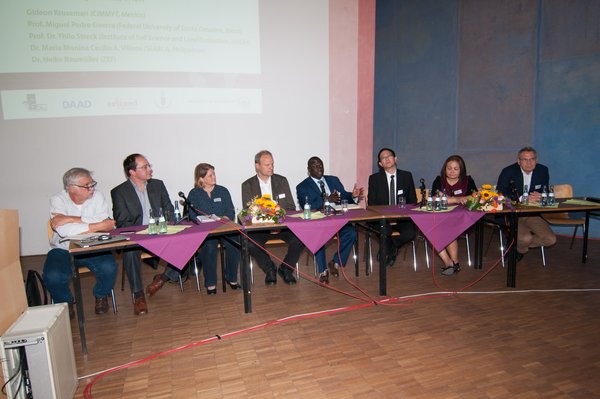 About big data and small-scale farmers

“Food and Digits” was the topic of this year’s World Food Day Colloquium in Germany, where scientists discussed the question whether big data and ICT could revolutionise the fight against hunger and malnutrition.

Who benefits from big data, and who uses it? These two questions ran like a common thread through this year’s World Food Day Colloquium at the University of Hohenheim in Stuttgart, Germany. The Colloquium was held under the title “Food and Digits”.

The issue is still mainly treated with scepticism – at the moment, anyway. At least this is the conclusion that can be drawn from what scientists stated at the Colloquium. More and more data are collected, but one had to question the use of them in the first place. If they were of no use, then there was no point in investing energy in data gathering, maintained Gideon Krusemann of the International Maize and Wheat Improvement Center (CIMMYT) in Mexico. Krusemann is coordinator of the CGIAR Platform for Big Data in Agriculture. One of the chief tasks of this platform is to gather and process data so that it can benefit agriculture and food security and be further disseminated. For “the benefits of the digitisation have not yet reached poor countries and poor people. We have to bridge this gap,” Krusemann said.

No good for small-scale farmers

However, this is not so easy, as a look at Asia reveals. “For us, digital agriculture is something similar to systems that support small-scale agriculture,” said Maria Monina Cecilia A. Villena from the Southeast Asian Regional Center for Graduate Study and Research in Agriculture (SEARCA). She is not sure whether the total market size for digital-based services in developing countries is going to grow, and if it does, this will happen slowly. For in Southeast Asia in particular, the majority of farmers are still sticking to traditional farming. According to Villena, low education standards and poverty are obstacles to a rapid digitisation of smallholder agriculture in this region. In her opinion, corporate farming, with small farms joining forces, is one option to overcome this obstacle and make better use of digital services.

Digitisation was yet in its infancy in Thailand, too, according to Witsanu Attavanich from Kasetsart University in Bangkok. One aspect Attavanich complained of was that the government was merely gathering statistics without making any use of them to lead policy.

A megahype with a huge disappointment potential

“Smaller farmers are driven out of business”, Thomas Berger of the University of Hohenheim in Stuttgart maintained, backing his statement with the observation that most efforts were in large-scale operations and in the developed world. “Data driven agriculture favours highly mechanised large-scale farming and agribusiness.” High expectations associated with digitisation of agriculture had so far not been met.

Berger warned against viewing digitalisation as the sole blessing to stop hunger and minimise environmental impacts. “We don’t know what the effects of digitisation of agriculture will be on food security. This is difficult to assess.” First, still prevailing fundamental knowledge gaps had to be closed. “If we carry on the way we are handling things now, this will lead to disappointment rather than to the technology being accepted,” Berger claimed.

Uganda: The mobile moved to the household level

One example of digitisation really bearing a potential to be of benefit to the rural population is Uganda. In this African country, the mobile phone is the number one communication medium. Important information, including scientific results, reaches the farmers via digital radio and digital TV and, above all, in the local language. “And the farmers call in sharing their experience and they immediately get a feedback on what they can do,” Alex Ruhunda, Member of Parliament of Uganda himself an entrepreneur, told the meeting. “Radios connected with mobile phones remain one of the most accessible and powerful communication tools in Africa to share knowledge.”

Nowadays, living without a mobile would be inconceivable for people in the country’s rural areas. Around a third of Uganda’s population have a computer and internet access. The mobile phone has now moved to the household level. “For us, this is very hot progress,” said Ruhunda.

Today, more than eight million Ugandans are using mobile money, i.e. they are handling their banking via their mobile. “The concept of mobile money is a very huge success in Africa, especially in my country Uganda and in Kenya,” Ruhunda stated. “E-money has great impact, especially when it comes to access to the markets, to know the price and also be able to sell your goods. This allows farmers to move faster than in the traditional system, which was prohibitive for them.”

In Uganda’s neighbouring country Kenya too, the mobile has firmly established itself in the life of the rural population. “Kenya is one of the most advanced countries when it comes to mobile technologies and digital industries in Sub-Saharan Africa,” explained Heike Baumüller of the Center for Development Research (ZEF) in Bonn, Germany. Various mobile services and apps are offered in the agricultural sector, such as information on weather, farming advice like the iCow, insurance schemes, supply chain management or financial services like M-Pesa. This service is used by 22 million subscribers thanks to a very widespread network of agents. Alone in the months from April to June 2017, transactions totalling 7.3 million euros were handled with this system.

According to Baumüller, a dense network with local agents is a very important precondition for the rural population to really make use of mobile services. “They can make people familiar with using the phone for something else other than calling,” she maintains, and recommends focusing on intermediaries such as agro-dealers, community leaders or agents like M-Pesa, who dispose of advanced technologies and digital skills. In her opinion, this aspect and more investments by local investors are the success factors for scaling-up strategies in the digital sector.