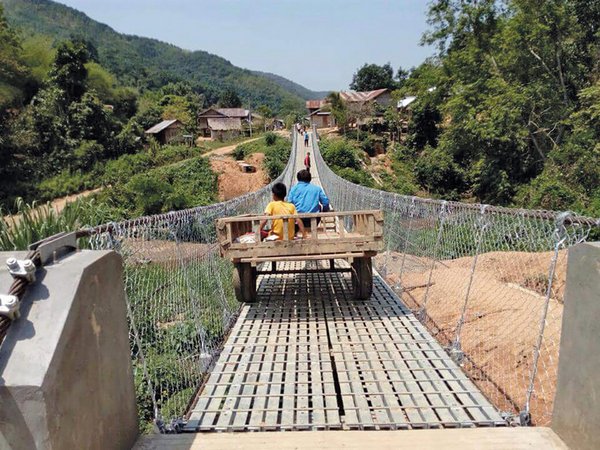 With a relatively simple improvement of the traditional Nepalese trail bridges, farmers in the Laotian province of Luang Namtha can now manage their fields more efficiently and bring their produce to the market. A South-South co-operation scheme in technology transfer.

Physical access to basic services and economic opportunities is a key to poverty reduction of rural people. However, given the huge investments it incurs, providing road transport facilities is not easy in many rural settlements of under-developed and developing countries. Therefore, a trail-based transport system will continue to play a major role in improving rural accessibility for some years to come. In this regard, trail bridges have been a vital element of the system. A trail bridge is a structure built in hilly cum mountainous areas or the plains across rivers and streams along the foot trail, in order to facilitate the safe crossing of pedestrians and animals with or without loads.

Nepal has been the evolving ground for trail bridges since the 1950s. So far, about 7,000 trail bridges have been built in the country. On average, a further 350 trail bridges are added annually to this total. According to a Post Bridge Building Assessment conducted in 2015, average daily traffic per bridge is 208, which amounts to about 1.4 million people using the bridges every day for various reasons. Trail Bridges have multiple uses: from visiting market centres to going to schools and health service centres, attending social functions, doing agricultural works and performing household chores.

A trail bridge is a highly appropriate local technology, both construction materials and skills being sourced locally, thereby making it a low cost and easily implemented form of rural infrastructure. In Nepal, communities have been building trail bridges (wooden log bridges and chain bridges) across Himalayan rivers using indigenous technology for centuries. Engineered trail bridge building started only around early 1900s. Bridges were assembled in Scotland, parcelled to Nepal and erected in a few strategically important market centres or main trails.

However, systematic and planned trail bridge construction only started around the mid-1960s, when the Government of Nepal established the Suspension Bridge Division. Since then, the technology has been greatly improved and adapted to the local needs. Now, Nepal provides technical assistance to other countries, especially Southern nations, to transfer and adapt the trail bridge technology in their context.

Innovation from pedestrian to tractorable bridges

Nalae and Long districts of Luang Namtha province in Laos are predominantly agrarian areas. Despite heavy reliance on labour-based farming, the use of tractors in farming is a common practice in these areas. However, without proper bridges over the Namyang and Namkha Rivers, farmers could not take their tractors to land on the other sides of the rivers, and had to rely on manual labour, thereby reducing the efficiency of farming. A tractorable bridge is useful to the rural people to transport their agricultural products directly from farm land to market or home. Helvetas Swiss Intercooperation in Laos realised this need and approached Helvetas Swiss Intercooperation Nepal’s south-south co-operation team to pilot a couple of river crossings that can accommodate power tillers (hereafter referred to as tractors). The organisation’s bridge team designed a tractorable bridge, which is an improvisation of the trail bridge technology developed in Nepal.

Pedestrian trail bridges are designed for maximum 1.2 m walkway width (see Box). For tractorable bridges, the walkway width was increased to 1.7 m in order to accommodate a 1.45 m wide tractor. Increasing the walkway width has an implication on the design load of the bridge. The self-weight of a standard tractor and the maximum loads it can carry were considered for design. Similarly, the dead load was also increased according to the increase in size of bridge components (e.g. walkway, cross beam, etc.). Suspended and Suspension bridges are flexible structures, hence they deform in the direction of load significantly. In order to control the vibration of the bridge while moving loaded tractors over them, a wind guy system was introduced irrespective of the bridge span. In a pedestrian bridge, a wind guy is generally only provided for bridges over 120 m in length. It enhances the lateral stability of the bridge. The construction of the bridges was supported by the Poverty Reduction Fund (financed by the World Bank and Swiss Agency for Development and Cooperation) and outsourced to contractors. Since these were the first bridges of their kind in Laos, Helvetas provided technical assistance to the Fund for quality control and monitoring of the bridge construction.

Chapee and Skan (see photo) are the two bridges built with this technology. In both places, crossing the rivers was unsafe prior to their construction. There was no bridge in Chapee, and people used to risk their life when crossing the river, especially during floods. They even had to spend nights in the forest waiting for the flood to subside. Whilst in Skan, there used to be a temporary wooden log bridge. With the construction of these bridges, local community access to schools, market centres, and agriculture farms was enhanced. The local people are now able to transport their agro-products directly to the market on tractors. Furthermore, motorcycle is a popular mode of transport in these areas and these bridges allow two-way motorcycle traffic, hence significantly reducing travel time. This has proved crucial, especially in the situation of health emergencies.

These pilot bridges are highly appreciated by the local people as well as the government officials. The simple improvisation of the trail bridge technology has proved to be a promising solution for rural farmers. It could be a new cost-effective transport approach in many areas in south and south-east Asia where construction of a motorable bridge is financially not viable. However, care has to be taken that these bridges really are only used by the vehicles that they have been designed for.

Suspended Bridge
A suspended bridge is built on sufficiently high river valley that allows required free board (minimum 5 m) from the highest flood level. It is economical, simple to design and construct in comparison to other bridge types. It has a downward sagging steel walkway fitted directly on the main cables (load bearing cables) which are supported by a network of suspenders attached to the handrail cables. Since it is a cable bridge, it vibrates when walked upon. A wind guy system is provided to control the excess sway if the span of the bridge exceeds 120 m.

Suspension bridge
The suspension bridge is designed for flatter terrain so as to attain minimum required free board. It has an upward cambering steel walkway connected to the main cables by the steel suspenders. Steel towers are provided at both ends to hold the main cables which are then anchored to the foundation blocks. This type of bridge is costly, and complex in design and construction in comparison to suspended bridge. It demands higher technical skill to design and construct. As in suspended bridge, a wind guy system is provided to control the excess sway only if the span of the bridge exceeds 120 m.

Niraj Acharya is a rural development professional and currently works as Water and Infrastructure Coordinator for HELVETAS Swiss Intercooperation based in Nepal.
Contact: niraj.acharya@helvetas.org

Bindu Khambu is a civil engineer who has been in the Trail Bridge sector since 1981. At present, he is working as a trail bridge expert in the South-South Cooperation Unit of HELVETAS Swiss Intercooperation based in Nepal.
Contact: bindu.khambu@helvetas.org

The authors would like to acknowledge the continuous financial support of SDC since the 1970s for the development of the trail bridge sector in Nepal.