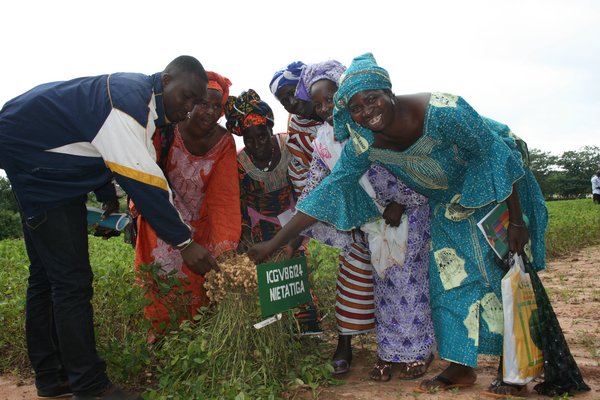 A group of producers of groundnut appreciate a variety at the ICRISAT research station in Mali during a women farmers field day visit..
Photo: ICRISAT

“Empowering rural women is crucial for ending hunger and poverty,” said UN Secretary-General Ban Ki-Moon on the occasion of the International Day of Rural Women, held annually by the international community on the 15th October. What this can look like in practice is demonstrated by the International Crops Research Institute for the Semi-arid Tropics (ICRISAT) with the example of the groundnut value chain in West Africa.

Groundnut is a woman’s crop in countries in West Africa. In Mali, 85 per cent of private/individual plots belong to women, and in Niger 35 per cent. In Nigeria, there is little participation of women in groundnut production activities, but they are strongly involved in local groundnut processing activities.

Niger: A cluster-based approach to enhance the groundnut value chain in the Dosso Region

During the last ten years, the International Crops Research Institute for the Semi-arid Tropics (ICRISAT) and partners have successfully built up women community-based groundnut seed systems in the Dosso region, in Niger. They have received financial support from the Common Fund for Commodities (CFC) via the Groundnut Seed Project in West Africa. The Bill and Melinda Gates Foundation has provided backing via the Tropical Legumes II project.

Individual farmers and women groups have been formed or strengthened in seed production and trained in small-scale business skills and marketing, and they are now producing good-quality seed. Farmers benefiting from access to good-quality seed are now producing good-quality grains. Interventions have been successful in the production sub-sector, but the processing and marketing sub-sectors remain the weak links in the groundnut value chain.

Strengths, weaknesses, opportunities and threats have been analysed to show that the major up-grading options include ensuring a consistent supply of high-quality grains to processors and addressing the lack of proper equipment to process groundnut into oil, cakes or pastes, the lack of training in business and marketing skills, the lack of access to credit for working capital or trade, and the poor linkages to traders who can sell the products.

Therefore, a pilot economic experiment was set up as a proof of concept for enhancing the groundnut value chain. Four clusters were formed in the Dosso region (Niger), each with about 100 women processors. The cluster-based approach has the advantage of helping farmers/processors to pool the demand for raw material and collectively sell the processed products. These villages are Moussa Dey, Guidan Gaba, Sambera and Gaya, and they were selected on the basis of the large volume of groundnut oil, cakes and pastes processed. Four other villages were chosen as control sites with socio-economic characteristics similar to those of the project villages, but where groundnut is processed by hand.

In order to resolve the problem of poor access to markets, ICRISAT liaised with two large traders in Urban Niamey who have expressed interest in purchasing 5,000 litres each of groundnut oil per week. This translates into a demand for grains (raw material) of about 1,800 tons of groundnut shelled per year.

In order to ensure the sustainability of such a venture, in each women cluster, a management team including the President of the women association, the treasurer and the auditor was set up or strengthened where already existent and trained in small-scale business and management skills. In addition, in each cluster, a man and a woman were instructed in using the decorticator and processing equipment and carrying out the usual small repairs. During 2011/12, the processing equipment company CDMA provided technical back-up in the use of processing equipment as a private partner. Very simple data forms are supplied to equipment operators to collect information on the use of the equipment and the costs and revenues generated. At the end of the first 3-vear-period of the project, impact studies will be conducted.

Considering the importance of groundnut as a nutritious food and source of income, and hence as an ideal crop to defeat malnutrition and poverty and in the context of present and future climate change, plant breeders and crop protection scientists are already targeting specific plant traits to breed new crop varieties that will perform better under climate change.

As part of the TL II project in Mali, ICRISAT is partnering with a range of partners, including public institutions and NGOs, to empower women individually or in groups to access these climate-smart varieties. In Mali, 22 new varieties (9 short duration and drought tolerant, 5 resistant to foliar diseases and 8 tolerant to aflatoxin contamination) were tested in mother trials in 40 villages involving 1,450 farmers (85 per cent women), and promising lines have been selected by farmers. In addition to evaluating new varieties, women were empowered in the production of high quality seed. In Mali, the women association of Wacoro produced a total of nine tons of seed of the preferred variety Fleur 11 (Alason), and it has been linked to a local private seed distribution company, Faso Kaba, for certification. Other women groups were trained in good practices of producing good quality seed.