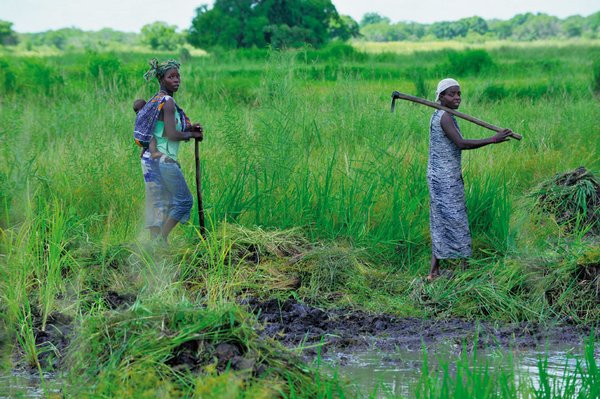 The formal inclusion of women in stakeholder fora does not automatically ensure that their interests are being voiced.
Photo: L. Ringhofer

Twenty-seven nations are classified as ‘water scarce’, a further 16 as ‘water stressed’. This situation, coupled with the fact that many surface and groundwater systems are shared between two or more states, has led governments to develop sustainable water management strategies. This implies a real commitment by all water users – households, farmers, and industrialists – to use available supplies in ways that reap sustainable and equitable benefits for all. Drawing on the experience from Mozambique and Zimbabwe, the author discusses some of the challenges of articulating stakeholder participation in a transboundary context.

The 2003 UN Report ‘Water for People, Water for Life’ listed 263 transboundary basins world-wide. These basins – the land area drained by a river, including its tributaries – cover 45 per cent of the land surface of the Earth, affect 40 per cent of the world’s population, and cross the political boundaries of 145 nations. The management of transboundary basins, whether sub-national or international, is one of the most demanding challenges facing water managers today. As upstream exploitation or diversion of groundwater or rivers can have harmful consequences for those living downstream, transboundary rivers often provide a source of conflict between actors, nations or states, especially where water resources are scarce. Similarly, when water-based pollution spreads across borders, there is an intricate need for sound governance.

There is common consensus that the goals of efficiency, sustainability and equity require the intricate involvement of the public. This decision is not necessarily taken for idealistic or moral reasons, but rather presents tangible benefits to governments: the participation of civil society not only improves the credibility and accountability of governmental decision-making processes, but also supplements scarce government resources for developing laws as well as for monitoring and inspection. In this respect, the involvement of the public holds the promise of reducing the potential for conflict over water issues. Therefore, in an effort to promote the institutionalisation of stakeholder participation, international water laws and agreements – such as the Southern African Development Community (SADC) Treaty, the SADC Regional Water Policy, and the SADC Regional Water Strategy – have over the past years started incorporating provisions committing governments and river basin organisations (RBOs) to involve stakeholders in water management decisions.
There now exist various approaches to stakeholder participation in transboundary water management: from bottom-up to more top-down, and from large geographic to smaller scales. One such attempt that resulted in greater stakeholder involvement was made by the Pungwe River Basin Joint Integrated Water Resources Management Strategy in Mozambique and Zimbabwe – or simply referred to as the ‘Pungwe project’. Funded by the Swedish International Development Cooperation Agency (SIDA), the first project phase began in February 2002 as a collaborative initiative by the two countries to jointly manage, develop and conserve water resources in the Pungwe river basin. A second project phase, this time with a stronger focus on designing and implementing a strategy for creating real stakeholder participation, ended more recently, in 2012.

The Pungwe river basin, an international watercourse shared by Mozambique and Zimbabwe, extends some 400 km from its source in the Eastern Highlands of Zimbabwe to its estuarine mouth in the Indian Ocean coast of Mozambique. A relatively small proportion (5 per cent) of the total basin area of 31,000 km2 is located in Zimbabwe. The rest of the basin and approximately 340 km of the river length are situated within the central region of Mozambique. Despite the relative abundance of water within the basin, however, there are sub-national and inter-state challenges to sharing Pungwe water. Increases in water demand are envisaged to come from the nearby Mafambisse Sugar Estate’s rehabilitation, various proposed large-scale irrigation schemes as well as the influx of agricultural water users along the Inhazonia River, a Pungwe tributary. There are also concerns about the deteriorating water and environmental quality due to gold panning activities in both Mozambique and Zimbabwe.

As a first step towards a joint water management strategy, both countries ratified the SADC Protocol on Shared Watercourse Systems of 1995 and designed and implemented various water sector reforms. In Mozambique, the Water Act Lei No 16/91 was promulgated in 1991, based on the principle of decentralisation in water resources management at operational level. It paved the way for the creation of five Regional Water Administrations (ARAs) on the basis of river basins. ARA-Centro, the regional water authority responsible for Sofala province, has been in charge of setting up the Pungwe Basin Committee as the main institutional structure for stakeholder participation. In the beginning though, the Committee was widely criticised as one of a mere consultative function. By contrast, Zimbabwe’s national Water Act of 2000 provided for more direct stakeholder participation right from its onset. River systems are declared catchment areas and catchment councils control and administer all local water affairs in these areas. Each catchment area is subdivided into sub-catchments where elected sub-catchment councils are in charge of the water management within a more localised river subsystem. The stakeholder forum dealt with in the Pungwe project is the Pungwe Sub-Catchment Council.

The role of these stakeholder forums appears quite straightforward: mediating between the water users and the water authorities. This also implies the inclusion of relevant stakeholders in development programmes, rural water supply schemes, or small-scale irrigation projects. In practice though, stakeholder participation turned into a highly complex issue throughout the project, given the dynamics of stakeholder roles, resources and relationships, all embedded in the larger context of power relations.

The first challenge was the limited timeframe for the formation of these formal stakeholder structures. This was particularly true for the establishment of the Pungwe Sub-Catchment Council in Zimbabwe, whose set-up followed a Catchment Council pilot model, keenly supported by various donor agencies as a way of saving costs. Yet another development at Zimbabwe’s national political level seems to have put political pressure on the stakeholders to accelerate the water redistribution process, thereby triggering an even less participatory approach: the government’s ‘fast track’ land redistribution programme. This resulted in reducing the scheduled six-month inception period for council formation to a mere six weeks. Or put differently: the formation process turned from an envisaged bottom-up into an implemented top-down approach.

A further challenge constituted the use of language among the different stakeholders. In Zimbabwe, although many of the stakeholder representatives spoke Shona as their first language, the official language used in the Catchment Council and Sub-Catchment Council was English, which seemed to contribute to the difficulty of expression for some participants. Similar observations were made in Mozambique, where Portuguese was used as the official language at the stakeholder meetings, although people’s first language was either Ndau or Chigorongoza. The different competing individual interests were manifest in the emergence of alliances among stakeholders belonging to the similar sectors. The by far strongest alliance in both countries surfaced between medium- and large-scale commercial farmers, enabling this group to dominate the forum agenda. The result was a strong emphasis on irrigation-related issues.

Although many studies identify women as central actors in the provision and safeguarding of water, women’s involvement in water-related decision-making structures remained low throughout the project. In Zimbabwe, women councillors within the entire catchment area merely constituted between 3.5 and 20 per cent. Generally, women’s participation on the Mozambican side accounted for less than 10 per cent. Despite the fact that international donor support triggered the stakeholder forums in both countries to adopt a more gender-responsive approach as the project progressed, the formal inclusion of women did not automatically ensure that their interests were being voiced. This newly assigned role to women as strategic decision-makers went very much against the prevailing tide of social attitudes concerning the role of women.
This reveals that effective stakeholder participation means adapting to the local socio-cultural context, rather than the other way round. Knowing the customary ‘rules’ is particularly important for the management of a common resource as important as water. It is meaningless to set up externally induced regulations for water use when there are a vast number of small-scale users who exert their own social control mechanisms.

Informing all, yet involving  a few

Another key lesson in the process of stakeholder participation was considering the balance between informing all, yet involving only a few. Not all issues are equally relevant for all. This became particularly obvious when discussing the burning issue of gold panning in the upper parts of Pungwe river basin. Many subsistence farmers from more downstream areas, where gold panning is hardly an issue, were also asked to participate in various stakeholder sessions and voice their opinions. Also, negotiations about the potential of small-scale development initiatives were initially channelled through ARA-Centro, the local water authority, with hardly any involvement of the local subsistence farmers who should be reached as the main project beneficiaries.

On the whole, the Pungwe project has given an important impetus for stakeholder participation in the transboundary management of the Pungwe river basin. The project has contributed to an enabling environment for stakeholder involvement, structures are now in place and people are aware of what it takes for integrated water management to materialise. However, ensuring equitable processes of representation, decision-making, and conflict resolution requires further time and efforts. Effective stakeholder participation is indeed a long-term process that transcends the lifetime of a single project.

The concept of Integrated Water Resources Management (IWRM) is defined as ‘a process, which promotes the co-ordinated development and management of water, land and related resources, in order to maximise the resultant economic and social welfare in an equitable manner without compromising the sustainability of vital ecosystems’. (The Global Water Partnership) IWRM is therefore not just about the more efficient management of physical resources, but also about reforming human systems to enable people – women as well as men – to reap sustainable and equitable benefits from those resources.