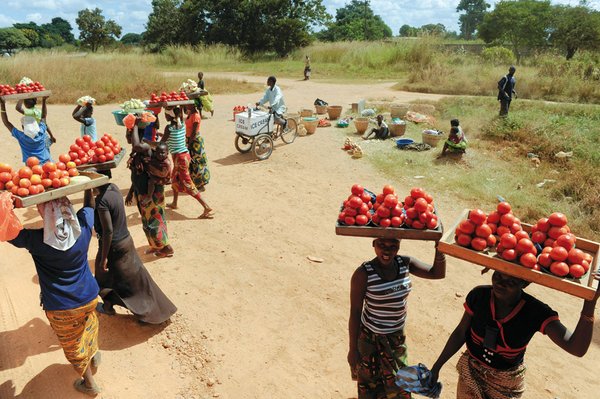 Rural women account for more than 25 per cent of the total food produced in Zambia.
Photo: Jörg Boethling

Rural women in Zambia: Light at the end of the tunnel?

With the support of international NGOs, Zambia’s government is making an effort to improve the conditions that rural women are living in. However, it is going to take a long time before the well-meant measures take effect – also because of HIV/Aids.

With almost two-thirds of the entire population, women are an important factor in the economic development of Zambia, especially in the agricultural sub-sector. Rural women account for more than 25 percent of the total food produced in the country. For example, of the total 12 million metric tons of maize which is produced every year, female farmers contribute about 3.8 million tons through their small-scale and peasant farming efforts. They are also engaged in horticultural, livestock, food processing and other agro-business activities.

Government support –  who benefits?
The government has been supporting these activities since 1992. For example, through the government-sponsored Farmers Input Support Programme (FISP), rural women have been benefiting from a credit and subsidised system which assists them with low-priced agricultural inputs such as fertiliser and seeds. All they have to do is to form co-operatives or join existing ones from where they can access the farming inputs. The FISP assistance per individual female farmer is a fertiliser pack of eight 50 kg bags of basal and top-dressing fertiliser plus a 10 kg bag of maize seed for one hectare of land under cultivation. This support also applies to their male counterparts. The current number of beneficiaries of the government-supported inputs programme throughout the country stands at 987,000; according to the Zambian Minister of agriculture and co-operatives, Dr Eustarko Kazonga, it shall be increased to 1,2000,000 in the next two years.
However, of the said number of beneficiaries, rural women account for a paltry 15 percent. Minister Kazonga admits that it will take some time before rural women in his country are fully catered for in the inputs support programme. Despite his ministry’s efforts involving wide consultations with gender-based units in the rural areas to see how best female farmers can be helped, he has to admit that there are still some weak points that need to be strengthened. For example, lack of storage facilities, late delivery of agricultural inputs and discrimination in the distribution of the same inputs pit female farmers against their male counterparts, and this tends to frustrate their efforts, while affecting their production levels at the same time. The fact that according to a government directive, in all the rural districts, via the district agricultural and co-operatives (DACOs), female farmers have been given preference for credit and subsidised agricultural inputs has not changed the situation so far.

Children of rural women especially hard-hit by malnutrition
With the help of non-governmental organisations (NGOs) working with rural women – e.g. Care International, Oxfam, World Vision – the situation is expected to improve tremendously. For instance, the Unites States of America Peace Corps has been committed to programmes meant to uplift the living standards of rural women in Zambia through the provision of soft loans, training, extension services and other forms of aid. Around a third of the country’s women have benefited from the various aid programmes. The Peace Corps is helping rural women to promote food security through increased food production. This is even more important when considering the high rise in maternal malnutrition in the country.

Zambia is faced with chronic malnutrition, especially among children born to rural women. Statistics of the National Food and Nutrition Commission (NFNC) show that 45 percent of rural children aged 0–5 years are malnourished and underweight. Shedding more light on this issue, NFNC deputy executive director Ms Beatrice Kawana said malnourishment statistics prevailing in the country were above the acceptable levels of the World Health Organization threshold. The breakdown is that 53 percent of children born to rural women suffer from Vitamin A deficiency, 46 percent have iron deficiency-related anaemia, while another 13 percent are born with low birth weight.

Poverty and disease –  a vicious circle
At a Food and Nutrition Consultative Forum held in Livingstone in Southern Province at the beginning of 2011, experts from the United Nations, USAID, NFNC and other international stakeholders expressed plans to help Zambia improve its investment in nutrition. A road map has been developed for both the short and the long term to intervene on behalf of rural children faced with chronic malnutrition. According to NFNC director Dr Cassim Masi, the forum was an eye-opener on the lack of agricultural development in the rural areas, where the majority of rural women wallow in abject poverty while they are forced to look after their households with few, if any, resources. This has in turn triggered the offshoots of hunger and starvation, whose effect is the high level of malnutrition in most of the rural areas of that country.

And then there is the onset of the Acquired Immune-deficiency Syndrome (Aids) pandemic, which continues to ravage most of the rural population in Zambia. Unfortunately, rural women are the traditional victims of the dreaded HIV/Aids and other sexually transmitted diseases. For example, out of the estimated 2.1 million people living with Aids in Zambia (total population: 13.5 million), almost one third are women in rural areas. The pandemic continues to be a worrisome socio-economic problem for rural women and has an adverse effect on food production and security. As more and more rural women fall sick, the performance of the agriculture sub-sector is expected to decline and deteriorate. In fact food production in the rural areas has been falling for the past ten years due to neglect and sickness of the female workforce.

In the name of tradition
Although Aids has not yet reached distressful levels in rural areas, infection is still on the rise due to poverty, lack of education and other cultural issues. As already stated, women in rural areas are victims of traditional values owing to which most of their men cannot accept the use of safer-sex methods to avoid both unwanted pregnancy and infection. This is because in some cases, cultural overtones have overplayed the importance of women in home-making, which makes it harder for them to ask their husbands to use condoms even when they suspect unfaithfulness. Customarily, men in Zambia believe they have right of sex with their women and women have an obligation to give them children. This belief alone has resulted in the country having a higher ratio of infected women than men. The statistics of infected women are in the range of six for women for every four men. The number could even be much higher in rural areas.

Sensitisation is difficult
Poverty, lack of education, illiteracy, culture and unemployment have all contributed to the rise in infections. Female-led NGOs like The Women for Change are trying hard to reverse the trend through lobbying the government and sensitisation of their womenfolk in the country. But this has worked more successfully in the urban centres, where social interaction and exposure to information is quite high compared to in rural places. In some rural districts, Peace Corps is helping women to combat Aids and fight stigma for those living with the disease. Only recently, the American government gave Zambia 276 million US dollars towards strengthening the prevention, treatment, care and support services for infected and affected people. Aids prevention in both rural and urban areas showed a decline in incidence from 18.6 percent in 1996 to 14.3 percent in 2007. Last year, the decline was put at 13.8 percent, although there are no official statistics to support it. Nevertheless, Zambia is still a hyper-endemic country, as most people continue to die from Aids related cases. The cost of prevention and treatment of the disease accounts for over one percent of Zambia’s Gross Domestic Product (GDP).