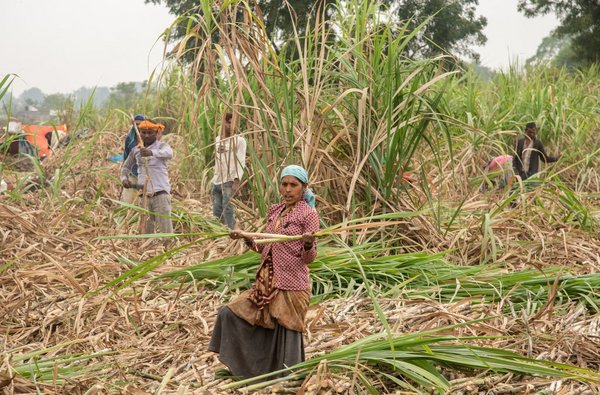 Free trade talks between the European Union and India

Considerable government intervention measures and subsidies have helped India ascend from being a net importer of sugar to figuring as the world’s second largest sugar producer and exporter next to Brazil. The Indian government is active at all levels ranging from sugar cane itself through sugar production to the sugar trade.

At the core of India’s subsidy policy is the minimum guaranteed price of sugar cane. Fixed by the government, it is high and continues to rise. To make up for the high prices which have to be paid for unrefined sugar, the Indian government in turn grants the sugar industry compensation payments.

Indian sugar policy obligates the producers to pay sugar cane growers a minimum guaranteed price for sugar cane. This price is defined by the government, independently of price developments on the world market. It is continually rising. Unlike the world market prices, which were on the decline between 2010 and 2019, the Indian sugar cane prices, for example, have grown twofold.

In addition, the minimum price guarantees for sugar cane provide farmers with an incentive to cultivate sugar cane. These prices are around 60 per cent higher than with competing cultures such as wheat. They result in a steady rise in Indian sugar cane and the corresponding volume of sugar produce, both of which have been exceeding domestic sugar demand by four to eight million tonnes respectively since 2018. The continuing sugar surpluses then have to be exported or stored. In turn, the Indian government intervenes to sell part of the sugar surpluses on the world market. These subsidies comprise comprehensive support for marketing, internal transportation and shipping from Indian ports to the target countries. In the sugar marketing year (SMY) 2018/19, they reached up to 137 US$, and in the SMY 2020/21 up to 84 US$ per tonne of exported sugar, which corresponded to around 49 per cent of the world market price!

Real-term and extremely distorting impacts on the world market

The combination of rising sugar cane prices and other generous subsidies is leading to a lasting surplus cycle in India which in turn has a considerable impact on world-wide warehouse stocks. They contribute to artificially keeping the world market price at a low level. Efficient German sugar-beet growers and sugar manufacturers, for example, who have to make do without subsidies, are no match for this. And for this reason, some countries have lodged complaints against the distorting Indian subsidies with the World Trade Organization (WTO).

The WTO Panel has arrived at the conclusion that India grants sugar cane growers considerably more subsidies than allowed. This subsidising is mainly the result of the minimum price guarantee for sugar cane, and over the past five years from 2014/15 to 2018/19, it accounted for around 90 per cent of the overall value of cane sugar production. In accordance with the WTO Agreement on Agriculture (AoA), subsidies must not be in excess of ten per cent of the total value, which means that India has not met its WTO obligations.

Fig. 2: Price developments for sugar cane in India and unrefined sugar on the world market 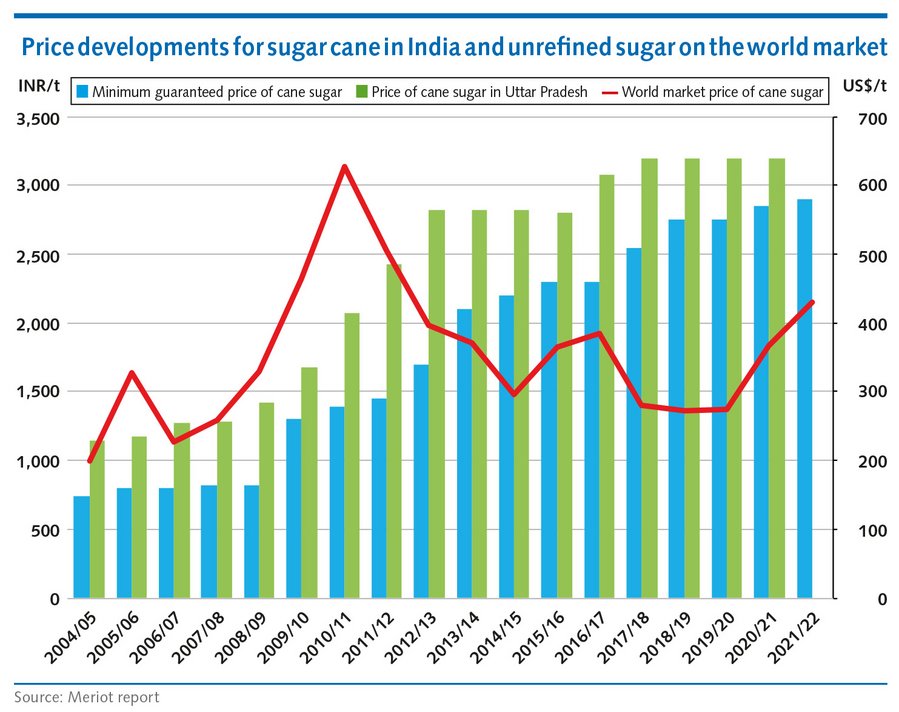 The WTO Panel has also noted that the Indian subsidies for sugar exports contravene the WTO Agreement on Subsidies and Countervailing Measures (SCM Agreement). As was to be expected, the Indian government appealed against this WTO verdict. Currently, however, the WTO Appellate Body is unable to act, so that the procedure remains stalled for the time being. India can continue to produce sugar surpluses with unauthorised subsidies which are then sold on the world market with subsidies violating WTO regulations.

The Indian sugar market is strongly protected by high tariff rates. The most favourable tariff for sugar is 100 per cent. India has signed several trade agreements with its neighbouring countries as well as with other countries further away, especially in Latin America and Africa. It is noteworthy that India has made no market concessions for sugar in the free trade agreements with the largest sugar exporters world-wide – the Mercosur countries, Australia and Thailand.

India can already export sugar in the context of two reduced-tariff EU contingents –5,841 t per year at zero tariff and via the contingent for all countries (erga omnes) of 260,390 t per year at a tariff rate of 98 €/t. On average, India exports around 30,000 t of sugar a year to the EU.

Given the significance of the sugar industry for India’s rural economy, the growing environmental impacts of the manufacturing process have been largely neglected for many years. In India, in terms of the amount of wastewater produced, the sugar industry is in third position after the pulp and chemical industries. Throughout the entire cycle, which starts with the production of sugar cane and ends with wastewater being drained from the mills, enormous amounts of water are used.

This process impacts on the groundwater level, which has far-reaching consequences for human health, livelihoods and the ecology of local waters.  Regarding herbicides, sugar cane farmers in India are able to use around 40 agents which are banned throughout the EU.

Despite efforts being made by the Indian authorities, burning up sugar cane continues to be widespread practice in agriculture and is responsible, among other things, for air pollution through particulate matter. Negative impacts have hence been observed regarding the health of the local population and of workers.

The German and European sugar industry are therefore expressly calling on the EU Commission to take swift action to counter the trade-distorting subsidies applied by the Indian government and, if necessary, resort to retaliatory measures. In addition, the current free trade negotiations with India must not lead to any further opening of the EU market to sugar imports as long as the subsidies contravening WTO regulations have not been suspended.