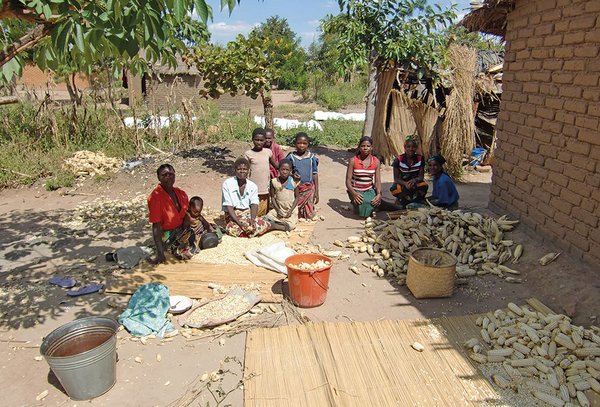 Less than ten per cent of the maize growers in Embu have opted for a weather index insurance.
Photo: Matin Qaim

Weather index insurance has often been hailed as a blessing for smallholder farmers to cope with climate shocks. These expectations were overblown. Generally, farmers’ uptake of index insurance remains low. But this does not mean that there is no potential. Research from Kenya shows that better tailoring index insurance to smallholder conditions could increase uptake with significantly positive effects for agricultural development.

Weather index insurance (WII) is a relatively new type of insurance that could help overcome some of the problems with traditional insurance schemes. Unlike indemnity-based crop insurance, where an insured farmer receives compensation for the verifiable loss at the end of the growing season, WII makes claim payments based on the realisation of an objectively measured weather variable (e.g. rainfall) that is correlated with production losses. Neither the insured farmer nor the insurer can easily manipulate rainfall measurements, which reduces issues of opportunistic behaviour. Also, in comparison to traditional insurance, WII is less expensive to administer, which can lead to more affordable insurance premiums and faster payout to farmers. Despite these potential benefits, uptake of WII by smallholder farmers is much lower than was initially anticipated. This gives rise to two questions. First, can smallholder farmers really benefit from WII? Second, if they can benefit, what are reasons for the low uptake of WII, and how could possible constraints be overcome? We have addressed these questions in a recent research project in Kenya.

An incentive for more inputs

Commercial WII programmes in Kenya’s agricultural sector have already been implemented for several years. The most widely known initiative is the Kilimo Salama Program of the Syngenta Foundation for Sustainable Agriculture. Kilimo Salama offers rainfall index insurance contracts against the risks of drought and excess rain. Insurance contracts are often (but not always) tied to the purchase of inputs – such as maize seeds and fertilisers – and provided to farmers through local input dealers.

If a farmer decides to purchase insurance, rainfall at the weather station closest to the farm is monitored for a specified period of time. If, during this period, rainfall remains below (or exceeds) a certain threshold, payout is triggered. The amount of payout depends on the concrete rainfall measure. The money is sent to farmers automatically through mobile money networks. If insurance is tied to the purchase of seeds, farmers have the option to only insure the first three weeks after planting. In that case, when drought or flooding occurs, quick insurance payout enables farmers to replant.

WII through Kilimo Salama is meant to provide new incentives to farmers and enable them to use more and better inputs. As low input intensity is one of the main reasons for the yield gaps observed in the African small-farm sector, higher input use is also expected to lead to higher yields and incomes.

Are the WII contracts really effective?

To analyse whether the WII contracts result in increased input use and yield, we carried out a survey of around 400 maize farmers in Embu County in the eastern region of Kenya. The climate in Embu is characterised by erratic rainfall and frequent droughts. Embu is also one of the regions where Kilimo Salama was already launched as a pilot project back in 2009. Nevertheless, up till now, fewer than ten per cent of the maize farmers in Embu have purchased WII. Our survey included both, insured and uninsured farmers. We oversampled insured farmers to have a sufficient number of observations for robust impact analysis.

Regression models were used to estimate the effects of insurance uptake while controlling for other observed and unobserved factors that might also influence input intensity and crop productivity. The estimation results show that purchase of WII has led to a significant increase in farmers’ use of high-quality seeds. Insurance uptake has also increased the use of fertilizer by 50 per cent and maize yields by 53 per cent. These are large effects that underline how much farmers’ cropping decisions are influenced by weather risk. For resource-poor farmers without insurance, fears of financial loss and liquidity constraints in cases of droughts and floods are important factors explaining low input intensities. While insurance payouts do not fully compensate farmers for crop losses in bad weather years, our results suggest that WII can change farmers’ incentives structures and contribute to higher crop productivity and income on average. Against this background, it is particularly surprising that WII uptake by smallholders remains so low.

How could insurance uptake be increased?

Further analysis of the data from Kenya shows that the relatively better-off farmers are more likely to purchase WII contracts than their poorer colleagues with lower access to markets and information. This is undesirable, as the poorest farmers are those that could benefit most from crop insurance. Obviously, Kilimo Salama and the particular design of the WII contracts are not yet sufficiently tailored to the needs and constraints of smallholder farmers. To better understand the constraints and examine whether changes in contract design could possibly lead to higher insurance uptake, we carried out a choice experiment with the same 400 farmers in Embu County. In this choice experiment, farmers were asked to choose between hypothetical WII options in which specific contract features were modified. The data reveal that farmers’ mean willingness-to-pay for the existing WII contracts is 25 per cent lower than the actual premiums charged. Reducing the premiums could therefore contribute to increased insurance uptake, even though this may be difficult without jeopardising the Program’s financial viability.

Another general problem with WII is that the rainfall measures at the weather stations are not identical to the actual rainfall at the farm locations, leading to so-called basis risk. Installing more weather stations, such that the average distance to each farm would be smaller, could reduce basis risk. Our estimates suggest that this would increase farmers’ willingness-to-pay, but only slightly. Hence, the insurance provider needs to weigh the benefits of additional contract sales against the costs of maintaining additional weather stations. A more fundamental problem is that many farmers struggle with fully understanding the functioning of WII contracts and when exactly payouts are triggered. The resulting uncertainty undermines farmers’ confidence and lowers their demand for insurance contracts. Better training could increase farmers’ confidence and thus contribute to higher insurance uptake. Transparent provision of relevant rainfall measurements and thresholds – for instance through regular text messages sent via mobile phones – would also increase farmers’ confidence and willingness-to-pay for WII.

Finally, the choice experiment suggests that offering contracts to farmer groups rather than individuals could be a promising avenue for wider insurance uptake. On the one hand, group contracts could help to reduce transaction costs. On the other hand, farmer groups can be important platforms for information exchange and mutual learning about complex innovations.

The results from our study are specific to one particular WII programme in Kenya. However, our findings are compatible with those from other studies, so that some broader conclusions are justified. In general, WII seems to be a promising mechanism that can help farmers to better cope with weather risks while avoiding many of the issues that have prevented indemnity-based crop insurance from gaining ground in the small-farm sector. But WII contracts are complex to understand and not yet sufficiently tailored to the needs and constraints of smallholders. More research and innovation is needed to improve the design and adapt the contracts to particular situations on the ground.

A range of international initiatives are developing and promoting risk insurance. One example is the G7 climate risk insurance initiative InsuResilience, which aims to insure 400 million people in developing countries against climate-related risks by 2020. Although it is undisputed that such insurances can be an extremely helpful tool for farmers in affected areas, unwanted environmental and social side effects may arise as well if they have not been well thought through. This was recently pointed out by scientists at the Helmholtz Centre for Environmental Research. For example, they maintain that there is a risk of farmers in developing countries who traditionally grow a wide range of crops in their fields reverting to monocultures because the agricultural insurance is often linked to specific crops. The result is a decline in agricultural biodiversity,  deterioration in soil quality and increased use of fertilisers and pesticides, which in turn raises the risk of water pollution. The scientists also refer to the weakening of networks of small farmers in developing countries as a risk. (sri)

Dr Matin Qaim is Professor of International Food Economics and Rural Development at the University of Göttingen, Germany. He has over 20 years of research experience in countries in Africa, Asia, and the Americas.
Contact: mqaim@uni-goettingen.de

Dr. Kenneth W. Sibiko is Lecturer of Agricultural Economics at Maseno University in Kenya. He holds a PhD from the University of Göttingen and has worked for several years on issues of agricultural development in Africa.